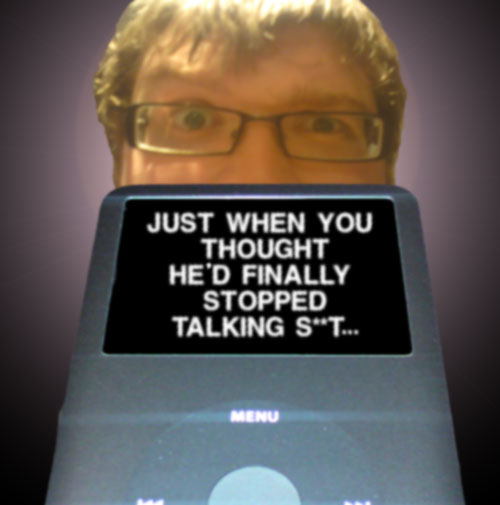 The Horror, the horror!!!

And so it came to pass that the Ooh Sometimes Podcast may one day return under the influence of drugs. But that day will not be soon. Sadly the real world and barriers such as playing a computer game for three minutes before getting bored and going back to play with my keys again, means that we may never hear the like of this filth again.

Mr Voice Over Man after being let go, was arrested for disturbing too many books in the local bookstore and larking about. As for the Lord of Leisure, well, that’s another story and sadly you will never hear that story.

Not unless you really like to punish yourselves and punching yourselves in the genitals wasn’t enough pain. Drop us a line if you want more artistic reviews of hardcore pornography and moaning about the French, and maybe, just maybe….

So with that out of the way, and the excitement left to build to cabin fever pitch where we’ll end up chatting to a football called Wilson, let the page continue with the last podcast to be released ever, way back in the month of August 2008. It was a different time then, broadband only got up to 6MB and George Bush Jr was still in office. Good simple times…. (cue wibbly wobbly flashback)

The last episode produced in August 2008, we came back with some questions: Will London make you cry? Does it make me cry? And how can you survive one of the most perilous tasks in today’s world? Find out in a special hour long episode!

What is the Ooh Sometimes Podcast?

This was the logo. Marvel in all it’s…logoness

It is a show which first began hitting the Internet in January 2007 and since then has changed into the award-winning (well It could win awards if I put it towards something maybe?) beast that it is today.

It began as a fat man’s attempt to get into the world of talking rubbish, and since the first inception of the podcast, which was created using a Dictaphone, some string and no script, it has grown to become a podcast which some people listen too. Sometimes more than once.

The Lord of Leisure is not alone for this venture into the broadcasting wilderness, Mr. Voice Over Man from America breezes in smoothly like silk or crackers, and provides us with such memorable lines such as….uh…mmm mmmmm something something.

In all honesty we here believe in good music, not only that we believe in music that we can play without fear of the big monster record companies knocking down our sand castle and stealing our ice creams because we dared to play three seconds of the Kaiser Chiefs without giving them our lunch money.

But once you listen to some of the best tunes from Music sites around the interweb, you discover that there is a lot of talent out there which deserve to be recognised and given the recognition that they deserve. Therefore you will always find two tracks of the highest quality for you to bop to in-between coma inducing fits of talking by Paul.

We are always open to comments, suggestions and death threats from you, the discerning web reader, so if you have anything to say, even if it is to say “I want to hurt you bad.” then please email to podcast@oohsometimes.com or via another method from one of the social networking sites we feature on. Do that and I will be more than happy to entertain you for 5 minutes before laughing heartily and driving off into the sunset with a generic busty lady of your choice. Failing that, Brian Blessed.

A list of the older podcasts from Season 1 will be created with links in the near future and featured here for your aural mastication. I said mastication….

I am Paul Hughes, The Lord of Leisure. Hear me now!

Credits:
Paul Hughes – His obession with cheesy snacks will lead to no good…
S.L. Slaughter – Mr. Voice Over Man

Music used for Titles:
The main title music is a piece called “Judee’s Tune” by Seismic Anomaly.
Gamer’s Corner Title is titled “Visualizer” and was created by CJacks from podsafeaudio

SFX have been used from The Freesound Project.

I made it a point to release the podcasts under the following license as per requirements from the music providers and also because it does protect the artists and my own work being showcased here for you. Sounds good to me!

This
work is licensed under a
Creative Commons License.