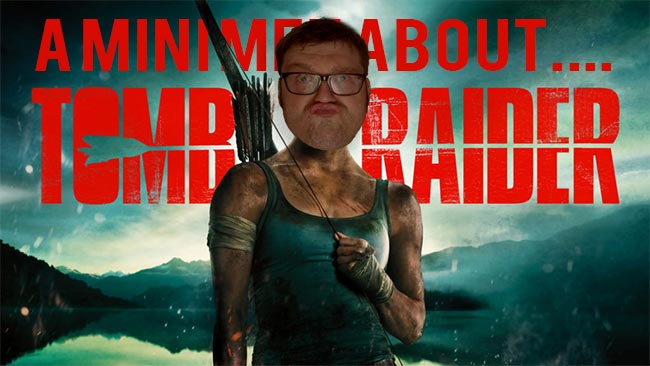 Would you want this raiding your tomb?

Video game films….. yep they are still for the whole part, chronically shit. Remarkably we came close to a good one earlier this year with Ready Player One in which happily, I can now report that I was wrong about the film going onto being a Box Office flop. It means that potentially, Hollywood will be more willing to try different things again and we the public get better choice in gaming films going forward.

However there was another film based on a gaming franchise to rear its head onto the big screen this year, Tomb Raider and oh my….

It was easy to not get excited about the latest attempt at Tomb Raider when it was due for release during March 2018. The trailer was about as gripping and exciting as you would expect sadly; Evil Orgnaisation blah blah, dead dad, blah blah, some action and shit collapsing. The film included the look from the recent game reboot and some of the ridiculous torture porn which I’ve come to associate the new series with too. But it was left unwatched. It was while at a friend’s house, he of course suggesting we putting it on for a laugh, that I even gave Tomb Raider: non Angelina-Jolie version a look at all.

So how will we get to our arse-kicking raider of the tombs we know and love? Well turns out Daddy Croft (Dominic West) via the gift of early narration uncovered a weird japanese lady ruler who held the power of life and death was buried alive and now a naughty bunch of bastards called Trinity are trying to dig up said lady to use her killing powers. But lo, he’s dead and Lara Croft (played by Alicia Vikander this time round) grows up to be a well-rounded asshole.

An asshole who hasn’t a pot to piss in and entirely obnoxious in almost everything she does.

She also never signed a piece of paper to inherit her father’s insane wealth because of….. why? No, no, we’ll come back to that (and the damned “fox hunt” bollocks) later. It’s too tempting to rush into the problems with this…. Patience.

She gets in trouble and thanks her lucky stars that Kristin Scott Thomas turns up to bail her out from the police station. One meeting with Kristen and Derek Jacobi later (in which she still doesn’t sign the piece of paper to get insane wealth) Lara gets a puzzle left behind by her departed father and thus discovers all his secret plans to stop the world from being f**ked over by the bad guys. One bad scene in a pawn shop run by Nick “Completely wasted in this film but at least I assume he got paid a lot” Frost later and we are in Hong Kong, tracking down someone who offered to help Lara’s dad.

Who also turns out to be dead.

Never mind, Lara can deal instead with the son of said dead dude who basically drinks, spouts the needed exposition and then goes off with her (it will be an adventure….) to find the island where the dead lady is buried. Cue various action sequences with bad guys who cannot aim and shoot to save their lives, some puzzles Lara will solve, an actual tomb which gets raided and some more backstory as required with the required open ending to leave sequels open should they find this actually made enough money to do so. 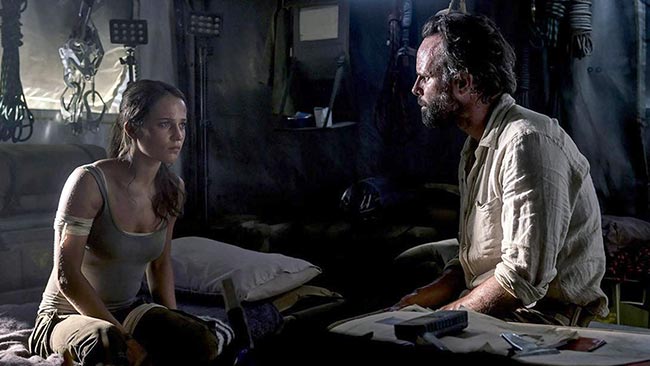 You mean, everyone still going to talk about Angelina Jolie’s tits in the old films even now? For f**k’s sake!

OK, this is going to get rather brutal now, as it has to be said that some of the plot of beyond stupid, even with the point of having to suspend disbelief, and it wasn’t helped by the opening 45 minutes frankly. I can in fact sum it up as follows; Who sells a priceless artifact at a pawn shop down the local high street when you could just, you know….. SIGN A F**KING PIECE OF PAPER TO GET ALL THE MONEY YOU NEEDED AND MORE TO GO TO HONG KONG AND I DON’T KNOW, HIRE AN ENTIRE F**KING CREW WITH LOTS OF SUPPORT READY TO HELP IF NEEDED?

Even if they were going to for the “independent” woman thing, no-one helped Lara grow up while Daddy was dead to allow her to make rational decisions? That whole damned “fox hunt” stunt at the beginning where everyone was cycling like idiots through London which lasted about 10 minutes; What was that for? Show us Lara had what it took to survive on an island against armed baddies (who well, yes, we know can’t aim for shit)? Or was it really to fill up screen time because you had nothing else?

The rest of the film ranges from ridiculous to dull, even for an action film where normally the laws of sense and indeed physics go out the window. The CGI was OK, but nothing more exciting, action was, well there when required for pretend tension and I guess suspense? As for the acting, it’s polite to call it wooden. Did everyone know this was a waste of time and was just picking up a paycheck for their troubles?

So was I in fact wrong to skip Tomb Raider at the cinema? Not on your life.

There were always going to be tropes galore in a film like this where the directors and writes may or may not have bothered to look at the source and therefore just come up with various plots which then would just mention names and bits from the games for fans. At least they did add a couple of bits in from the game, even if they were just ridiculous but overall we’re still at the same point where what makes a good game does not add up to making a good film. Utterly cannot recommend this, well, unless you do want a laugh at how bad it is.