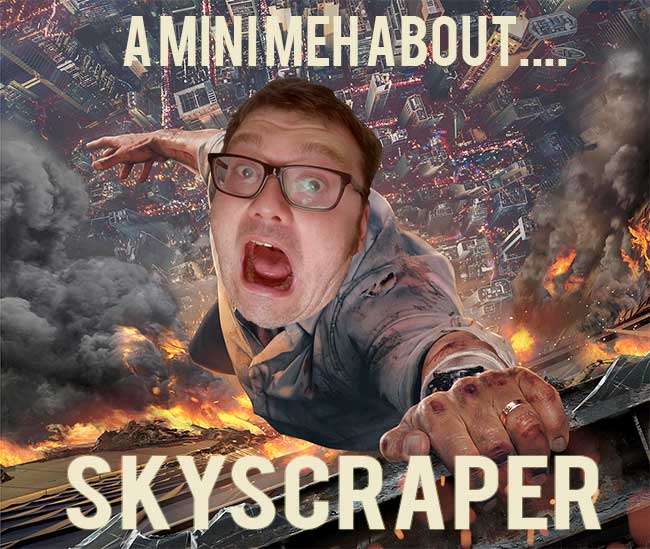 July was been a bit of a weird time for films we would class as an out and out summer blockbuster to park down with, chew on various things and woo incessantly over. A typical time of year where kids are off and get to hound their parents into spending time and money over things the parents have no wish to actually do themselves. The last trip to the cinema to enjoy the Incredibles 2, was enjoyable fun but other than that, there wasn’t really anything to jump up and down with joy over.

So when Skyscraper finally came onto the scene mid July, it came as something of a relief. Promising boombastic set-pieces and even getting some comparisons to Die Hard (the best Christmas film ever), in the summer drought we’ve been experiencing thanks to the World Cup and studios also not wanting to clash with their own movies’ box office, this was just needed. But would it live up to the comparisons being made with Die Hard? After all, Alan Rickman as Hans Gruber is a tall order to better for the required villain here in Skyscraper. Jon Mclean anyone? Yippee Kay Yay? Ok, I’ll stop.

The story of Skyscraper brings us in with Dwayne “The Rock” Johnson, as again some ex-special forces dude because, well you wouldn’t really see him as an ex-librarian at this point with his movies would you? We see him suffer during the opening moments of the film which shows after a hostage situation going wrong, he survives with a prosthetic leg. I can’t actually recall the last time an action hero would have a false leg come to think of it, so it was a new aspect to bring to the table at least.

But that’s not all folks, he has a nice family (Neve Campbell plays his wife, which is nice!) and they have gone to Hong Kong to sign off on the world’s largest tower built in Hong Kong because he is basically a professional health and safety guy now. For a while then, we see various aspects of the building with lots of lovely wizzy tech features which you know are going to go wrong or be used by the bad guys to do various naughty things. The foreshadowing is so damn obvious, you basically would start a bet as to when they would show up later in the film. 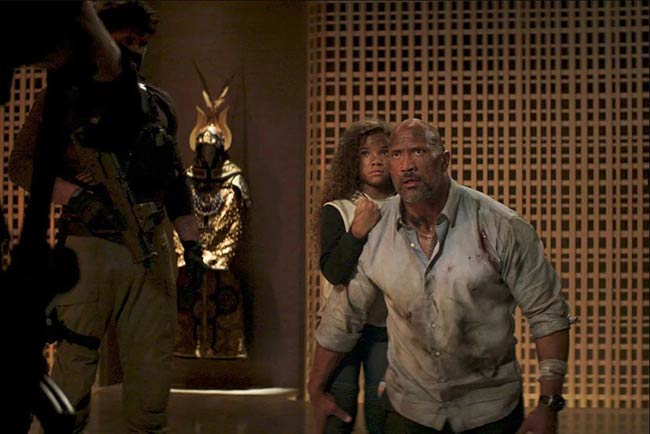 We meet the owner and and his best friend from back in the day who cannot wait for everything to get signed off so they can make all the monies or whatever the plot was. Oh and the evil English guy who is the insurance guy who would only insure the building in the event of sign-off, seriously he looked way too obviously like a bad guy. It’s at this point we start seeing all the pieces move together to cause the required meh for the film, with bad guys pretending to be workmen, having exoitic accents and attempts to be human. Aw yeah, we know poop is about to hit the oscillating device!

So things kick off, things then explode, tech goes wrong and of course the family of Dwayne are trapped in the building. It’s up to Dwayne and whoever else happens along to save the day, false leg and all.

So what are we getting for our cash here then? We see a good number of stunts take place, some of which of course are going to be ridiculous and honestly, you would be at least expecting that. There were a couple of WTF moments where situations were created that made no sense but again, it’s par the course for this type of film.

One thing which was better was that Neve Campbell was allowed to kick a bit of ass at least instead of just being the damsel in distress all the time, and one of the biggest laughs I always had with the film was with the crowd that was always watching what was happening outside the building on a big screen TV that happened to get set-up in time. Seriously, is this what people in Hong Kong do? The police also played a decent role, being serious but also being humorous a couple of times which was most welcome.

But overall, Skyscraper doesn’t really do anything more than exactly what the trailer shows you. In fact all the things noted above, could also be constructed as a weakness. The action is alright, the WTF moments which could also make you laugh just as much as awe you (Dwayne jumping over to the building from a crane an incredible distance away is one such moment) and pretty much you already know who is going to save the day.

The main villain they have in is clearly what they intended to have as the Hans Gruber chracter from Die hard, except he’s from Russia this time and doesn’t wear a nice suit. He’s there, delivers what he has to to move things along but ultimately is pretty forgettable.

Was Skyscraper worth the wait, catching it on the big screen and of course do justice to the action that needs to take place within a large building? Well……ish.

Skyscraper is no Die Hard, but certainly a try hard. It does pull off some great moments for sure against the CGI backgrounds that are in place every time and there are some silly moments too which give it a sense of humour. But I could easily just have taken this watching at home while doing the ironing. When you make the comparison with Die Hard, a film released in the 80s, it’s remarkable how little of a contest it would be. Given the choice campers, it has to be Die Hard any day of the year, and not just for Christmas.