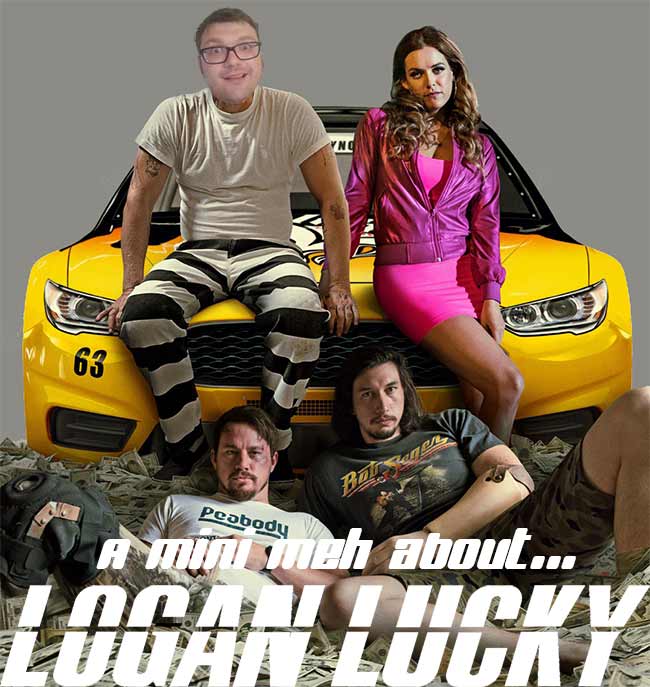 Direct from the UK Premiere in the West End, it’s time to meh about the Steven Soderbergh directed heist comedy, Logan Lucky. Or at least it would have been had I actually bothered to write about the film directly from the premiere! Lucky for me at the time, I did also do an Aftermath video which you can view here.

That video was recorded over a year ago and since then this film has gone mostly under the radar in a lot of respects. It’s made it onto Amazon Prime recently, hence one reason you may suspect for returning to writing the mini meh about Logan Lucky. But there was another reason to do so actually and it’s thanks to Ocean’s Eight. You see, we’ve not really had a damned good silly heist movie in quite some time. At least, not one based in the Marvel Cinematic Universe. I’m looking at you Ant-Man….

Why would I say we’ve not had a good heist movie in some time? Ocean’s Eight was supposed to be a return to the hit Ocean’s Franchise, only time time with 8 sexy gals proving they can steal just as well as any man. While perhaps the film ticked boxes for some people, as written on here in fact, the only conclusion I could reach was; It was boring and pretty much proclaimed it to be the cinematic equivalent of rice with nothing else served with it to make it a proper meal. I may have written it that way as I was feeling hungry at the time, but the point still stands.

So when Logan Lucky was released on Amazon Prime in the UK recently, i thought it best to return back a year and see if in fact what I thought about it then still stood the test of time. So what actually is Logan Lucky all about? It’s a tale of woe for the Logan brothers Jimmy and Clyde (played by Channing Tatum and Adam Driver) as they go from one piece of bad luck to another, trying to keep things together and live a reasonable life after giving up crime. Though in North Carolina, that perhaps is not easy.

Jimmy has a bum leg and thus thanks to Health and Safety concerns, loses his job. He may also lose access to his daughter as his ex is moving away. Meanwhile Clyde is not really having too much fun running a bar with one arm, having lost it while serving in Iraq and having to put up with a very badly acted British man (Seth MacFarlane) who sells energy piss drinks and runs a Nascar team. 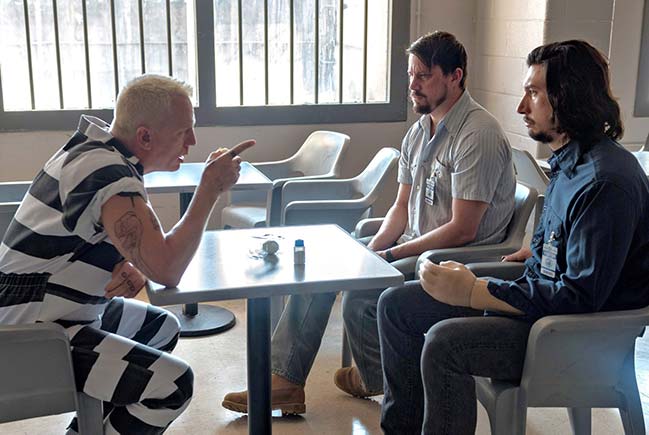 You telling me…. that I could get compensation for an accident at work?

One altracation later and the two decide to rob a local Speedway because Jimmy knew all about the pneumatic tube system there used to move cash around. Thus begins the heist caper.

Now I have to say that remarkably, one of the highlights of the film was Daniel Craig who played a convict known as Joe Bang, a guy the Logan brothers bring onboard because of his safe cracking skills. It’s quite the departure for Craig and to be honest, most of the time he was on screen, talking in the strong southern accent, eating eggs from a vending machine with fake salt and his very unconventional methods of making explosives all provided for great entertainment if nothing else.

The prison riot which was used to cover Joe Bang’s “absence” had some great comedic moments even to the point where they were moaning about why Game of Thrones had diverged from the books with the prison warden. It was just silly and I loved every minute of it.

One could argue actually, that with the scale of this heist movie being somewhat reduced to a smaller local setting in a part of America which doesn’t get much screen time aside from over the top dramas and stereotypes, made a lot of the difference with this film. It doesn’t have the glitz and glamour you would have with Ocean’s whatever, but Logan Lucky ended up more grounded, certainly funny and provided some real reasons for the characters to do what they do. These were guys you could get behind and root for in a more tangible way.

The one real bad part of the film was Seth Macfarlane and his attempt at a British accent. Perhaps being british might make me more sensitive here, but god damn, every time he was on screen and talking, my ears would bleed. I am a fan of his for sure, having enjoyed Family Guy, American Dad and recently the Orville but in Logan Lucky, you would have been better off having a piece of cabbage on screen. It would have been much less annoying to say the least and ultimately his chracter was a real distraction from the film itself.

So it does come down to whether or not Logan Lucky is a steal (geddit?) to watch over the aforementioned Ocean’s Eight. The clear answer is yes, I recommended it a year ago and I would easily recommend it now, especially if you can watch it as part of your Amazon Prime subscription.

The film didn’t do that well at the box office and in some ways, it’s very hard to understand why. Logan Lucky was much more entertaining, better characters to root for and was actually funny. This film should have had a better fate than what occured at the box office, and that perhaps is the bigger crime than any heist the Logan boys try to pull.