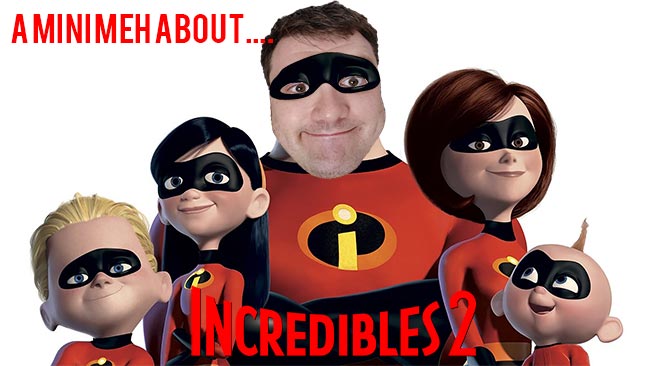 Not so Mr. Incredible…..

I literally had to look up when the first Incredibles film by Pixar came out before they were swallowed up by the house of Mouse (Disney, our new corporate overlords who control everything we geeks like it seems) and actually ponder one thing; Who was asking for this sequel?

Unlike the back and forth you would see in the geeksphere about whether Blade Runner should have had a sequel or not, this pretty much snuck up on everyone and frankly regardless of how good it was, automatically becomes a welcome relief from the lack of anything decent to watch during the summer months this year, by all accounts because of the World Cup and the studios not wanting to release all they had done at the same time, thus cannibalising ticket sales at the box office.

Hi movie studios, some of us don’t care about ballfoot so if you can sort this all out proper next time, that would be great, mmkay?

Anyway, we begin the Incredibles 2 with a scene that directly follows on from the ending of the first film where the family of superheroes are about to engage the new dark force of the “Underminer”, a mole like dude with a giant underground drill thingy.

We see them all get in on the act of saving the non-descript city all while juggling who gets to look after the baby Jack-Jack (who should be mentioned now, steals a lot of the film) and of course, with superheroes still being illegal at the end of the first film, the incredible family get arrested and get relocated one last time to a motel due to the superhero protection program being shut down.

They basically have to fend for themselves and luckily two happy go lucky billionaire owners of a tech firm come along with an offer to help the superheroes become legal again so they can save the world like the good old days.

Only thing is, from a PR point of view, only “Elastigirl” (Holly Hunter) is considered for doing the saving on an ongoing basis, mainly as she doesn’t break things as much. This of course upsets Mr. Incredible (played again by Craig T. Nelson) who basically struggles being the dad at home helping the kids and dealing with Jack-Jack’s new powers which get slightly out of control shall we say.

But there’s soon a new villain on the rise, with the power to control people at will and thus carry out ever growing acts of terror. To what end? Dun Dun Duhhhhhh and other noises.

That’s pretty much the premise that I will reveal here on the mini meh, but now to the point of what worked and what didn’t in the Incredibles 2 and of course, whether or not you should spend your hard earned cash on that ticket.

And our next contestants for Blind Date are…..

First of all, all production values etc are top notch as you would expect, and the fact they really keep to the same level of design of the world with the 50s – modern look, including keeping the continuity on display with this sequel in the opening moments was quite impressive given the gap in-between, but perhaps that’s the handy point of having all this digital in the first place. Without being a real nitpicker between the first and second, I would be hard pressed to just to accept this as is.

That being said, I don’t think this works without watching the first film, as there are a good number of references on show in the opening third so I would recommend watching the first before Incredibles 2 so you get the whole picture.

This film gets a little dark and scary, but perhaps not as dark as Mr. Incredible did in the first where he threatened to crush one of Syndrome’s henchmen. That was quite a thing for Pixar to do back in the day.

In fact here, Mr Incredible himself during the film is quite the wet blanket. He hates being out of the superhero game, we had that in the first film. But now he’s having to learn how to parent and not run away all the time? He ends up being quite the throwback to the 50s again being surprised that a woman would be asked to do things above him and in some ways, he’s gone backwards again in terms of character development.

Now I think of it, there was a fair bit of filler here which didn’t really add too much. Overall I could argue Incredibles 2 was uneven, but not certainly not boring. It was entertaining and good fun, which fits the bill nicely during this summer of downtime waiting for anything considered a good “blockbuster” release.

The final third of the film is good action and thus brings the film on home to leave everyone on a high. But I’m not so sure we would want to see another one like this. If Disney were to do another Incredibles film, it would be great to see everyone in their prime unleashed proper with a damn larger than life supervillain and cut back on the domestic rubbish a bit now.

So to wrap this all up now; is it incredible that Disney and Pixar made a sequel which wasn’t incredibly a bad idea? Yeah, it was a good movie to enjoy and I would say take yourself down to the picture house to enjoy this on the big screen. It worked well, with enough bombastic parts to it to keep you interested while again exploring some slightly different aspects away from the first film which while sluggish, was not boring. Hooray for superheroes still then!