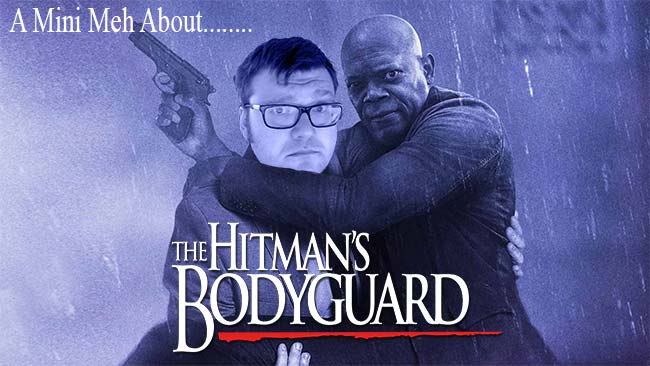 And I will always love you……

Good lord this is a late mini meh eh? But actually from last year there are a good few films which were deserving of the Mini Meh treatment and in these lean 2018 summer months, it’s a good time to revisit some of the big releases of last year. First on the chopping block of meh; The Hitman’s Bodyguard.

Released back in August 2017, and since then has come out on shiny disc and various streaming services, The major thing I remember this movie for, it had one of the best small scale advertising campaigns I had ever since in a while. In fact, not since Deadpool had I been waiting more for an action comedy flick with Ryan Reynolds being the smart-mouthed badass, which of course he repeated this year with Deadpool 2 to great effect.

From the trailer which showed how insane it potentially could be, to the ridiculously funny p*ss-take of Ryan Reynolds holding onto Samuel L Jackson as you may get from the terrible Photoshop effort for the title of this mini meh, where they’re running through the rain and of course stating the rules from 1992’s “The Bodyguard” hit which starred Kevin Costner protecting Whitney Houston.

But of course, this is nothing like the 90s love fest, not unless you count a surprisingly funny recount of how Samuel L Jackson met Selma Hayek as part of the story, but that’s getting ahead of myself of course.

So the Hitman’s Bodyguard, what’s it all about then? We begin of course with our top protection agent, Micheal Bryce (Ryan Reynolds) delivering an old man to a private plane at London City Airport. All appears to be going smoothly till his client leaves the land of the living by a shot to the head. This is where pretty much it appears Micheal’s life goes a tad wrong, then being forced to take on other protection jobs of seemingly less savoury chaps and drive a car that smells of piss.

But then fate may give him a chance at redemption, as another hitman, Samuel L Jackson is being transported to the Hague to testify against an evil dictator in the way that only Gary Oldman could play one. Of course, instead of flying him there, he’s driven through Coventry at which point it goes wrong and Micheal’s ex sexy lover (Elodie Yung) enlists Micheal’s help to deliver Mr Jackson and thus restore his reputation as a top protection bloke. It’s at this point that things really start taking off. 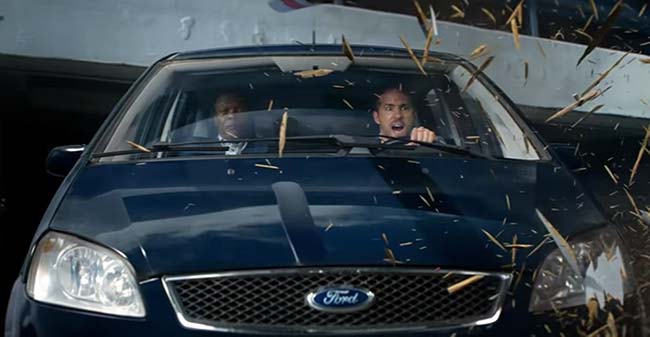 Who wouldn’t be this excited to drive a Ford Focus?

What we get here is a nice little ride through silliness and action as our new buddies, who are also trying not to kill each other, move from merry old England to merry ol Holland, killing and wise-cracking along the way. There’s some great moments as mentioned from Selma Hayek, who plays Jackson’s wife to great effect, terrorising her cellmate for reasons we never know.

The story’s nothing massive to write home about, and given the questions about how it was set-up to have Mr. Jackson travel from Manchester over to Holland by Car and Ferry instead of Plane, I guess it would have meant the film would have been over quickly? There’s a couple of other silly plot points which make no sense, but you do end up forgiving them as you go along with our two main protagonists. Make no mistake, a lot of this film relies on the back and forth between two professional killers who hate each other and it works very well.

Ryan Reynolds and Samuel Jackson are on fine form, clearly enjoying themselves and just playing off each other more and more as the film goes on. It is an actually developing relationship you can follow and there’s no way you wouldn’t be rooting for them by the end. There are some great scenes in Holland more than anything, including a moment where Ryan Reynolds is moaning and drinking at a small outside bar while everything else gets shot up around him. A great few car chases ensue and you do get your monies’ worth even if the CGI is badly done at times.

There’s not a great deal to the other actors and actresses on show here, they do their jobs as they need to, but there were some moments which did feel too forced and didn’t add much to proceedings. The initial scene showing how cold Gary Oldman is as the dictator facing war crimes set the scene well, as often as he can do anyway in any role.

In the end, the Hitman’s Bodyguard is a good couple of hours where you will enjoy yourself. It’s easy to see why there is actually a sequel now planned, though unless there is a much more meaty story for the actors to chew on, it may be pushing things and outstay its welcome. There’s no reason not to catch it on your favourite streaming service or shiny disc now, especially as it will also be cheap to do so. It’s an easy choice to make and you will not be disappointed.