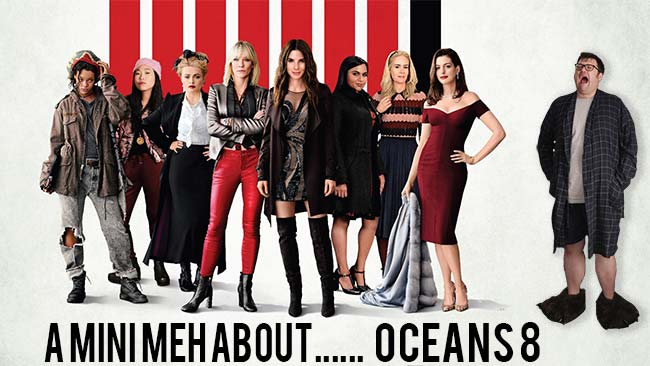 I can actually cut to the chase about Oceans 8; This was boring.

It’s no joke sadly, I was honestly bored while sat down in the cinema watching the latest glitzy heist / con artist entry in what seems to now the “Oceans” franchise. It’s likely that you all remember the 2001 remake of the original 60s hit? It stared the Clooneist of Georges among various other stars like Brad Pitt, Matt Damon and Julia Roberts.

The central premise of Oceans 11 was that our elite thieves of our hearts as well as money set their sights on robbing Andy Garcia blind while a boxing match was being played out in Las Vegas. Cue a few mishaps, a bad English accent from Don Cheadle and some frankly awesome music set up various sequels there after of varying quality.

So I can only conclude that Hollywood decided enough time had past from Oceans 13 and it was time to milk the same teat once more for everyone’s hard earned cash. The thing is, I don’t think it’s the cast’s fault. Why even remark on that? Well this time, it’s the turn of the ladies to take centre stage.

Much like the remake of Ghostbusters back in 2015, the main cast of men was replaced by women, and there are some find choices here with decent acting chops to say the least. Sandra Bullock plays Debbie Ocean, who happens to be the sister to Danny Ocean (formally George Clooney) which automatically raised the question of….. how come we didn’t know about her before? Well therein lies the rub. Rather than make the clean break from the previous films, Oceans 8 is a follow-on, even going as far as getting a couple of the original cast members to turn up. This means that really, they are relying on Nostalgia to hold the rest of this film up and that’s where it gets a bit silly. 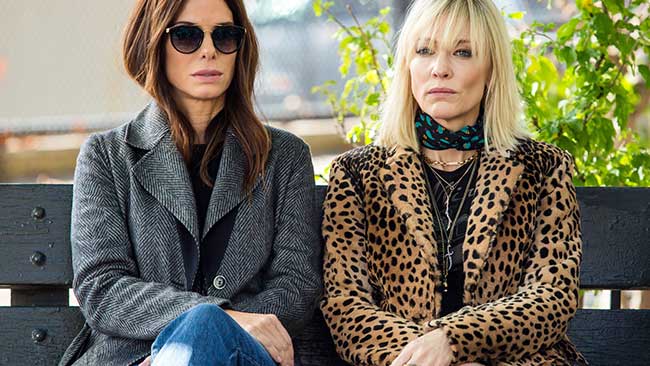 Wonder if they are watching the film back too…..

Danny Ocean’s dead ladies. They make that clear from the first couple of minutes in fact. I suspect it’s more down to the fact they couldn’t get Clooney to come back in any shape and form for his “endorsement” for this sequel, and in a strange sort of they then have that hang over moments of the film all the way through. What’s worse, it appears to be almost the same plot, involving stealing stuff that’s worth a lot while getting one over on an Ex. Hell they even have pretty much the same scene between Debbie Ocean and her friend Lou (Cate Blanchett) as George Clooney and Brad Pitt have in the first remake when it comes to the ex. The only twist here is the Ex had Debbie put in prison, so it’s pretty much just straight up revenge.

We see a good number of introductions with various social stereotypes playing out quite nicely to then lead up to all the planning parts to the actual caper itself being pulled off. Some of the highlights actually revolve around Amita (played by Mindy Kalling) who has a couple of really good funny moments either by herself or with Helena Bonham Carter, who basically is playing herself again for lack of a better way of putting it. Only this time her character’s name is Rose.

After Rose speaks a load of French for example, Amita basically chimes in “Oui”. Well timed and I had to laugh. Another surprise was James Corden towards the end, working for an insurance firm investigating the aftermath of the robbery. He was actually capable and carried himself well for the few scenes he had.

But there were long periods of time where I wasn’t really caring what was going on, and they leant too much on the standard stereotypes at times, where sometimes you really just wondered if people in these high positions are really that stupid. For the purpose of this film, most of them are, except for two people which comes as a nice surprise at least. In a way, Ocean’s 8 could have been more than what it is. There are some talented actresses here, they just haven’t been given much to work with. Shallow would be the kindest way to put it when it comes to describing this film.

Now there’s nothing wrong with shallow films, let’s be fair. But what they put together here seems to be the pound shop version of Oceans 11, and save some nice story twists towards the end, it’s just not really that entertaining. I even have to remark on Rihanna here, I’m not even sure how she got the gig as she doesn’t really do that much and it seems they tried to keep her lines to a bare minimum, maybe because not everyone’s forgotten Battleship? But then there’s other arguments easily made about how they didn’t use a lot of the cast to do anything that substantial. They were just there, filling out whatever requirements the studio had in terms of casting.

Sorry campers, but there is no way I can recommend Oceans 8 here till it comes out ov TV at best. It might be alright to have on in the background while you hoover up your front room perhaps. Some good talent on screen can mitigate some issues, but they can’t paper over the same old formula which sadly is not that well done here. They try to be all glitzy and glamourous like before, just they end up with the film equivalent of Rice. Just rice by itself without any flavour. Basically it’s missing the other part of the dish to make it overall a tasty proposition so you’ll be easily reaching for the desert menu to having something much more tasty to forget about the rice.