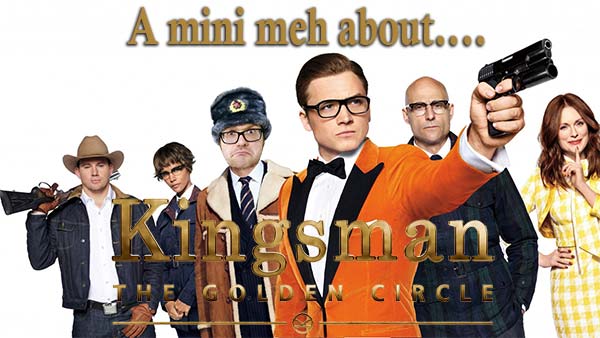 Why no, I’m not working for any foreign power…..cough…..

In this modern era of lies, treachery and our favourite, deceit which somehow seems to mainly involve the Russians and pee tapes, it’s easy to forget that there was a time when we could have a good laugh about the whole spy business. Remember the days of old with James Bond, where they knew how absurd and over the top it was at times to have a British guy going round the world defending Queen and country while pretty much having sex with every woman he could? You could only imagine the gene pool for the countries being irreversibly tainted as hardly anything Bond did was considered safe sex! The bad guys were also quite insane as they too embraced the outrageous. Jaws, played by Richard Kiel, is by far one of the best villains we ever saw on the big screen and he hardly spoke.

Of course, the world of spies got much more serious with recent adventures of Bond under Daniel Craig’s care and perhaps just more in keeping with reality, which is sadly at times more insane than any fantasy could be as it stands. Bond used to provide escapism and now at times, only seems to be a shadow of its former silly self.

This brings me onto the film series which dares to keep on the weird and wonderful path of Spy films of old, Kingsman. The sequel to the frankly fantastic Kingsman: The Secret Service arrived last year with The Golden Circle (Not to be confused with the Golden Shower which I’m betting will be the subtitle to the eventual oscar bait of Donald Trump).

Big names came and got killed as Eggsy (Taron Egerton) joined the Kingsmen of Saville Row (Who happened to have Colin Firth as Harry Hart on board) to defeat the billionaire mad man Richmond Valentine (Samuel L. Jackson who played such a wonderful role as the villain to be fair) from destroying the world via our obsession with mobile phones. It involved heads exploding, Mark Hamill as a college professor, an amazing fight scene in a southern Baptist church which is still amazing to this day and of course a dirty Crown Princess of Sweden played by Hanna Alström. The whole cast and crew should always be applauded for the first Kingsman film to be sure. 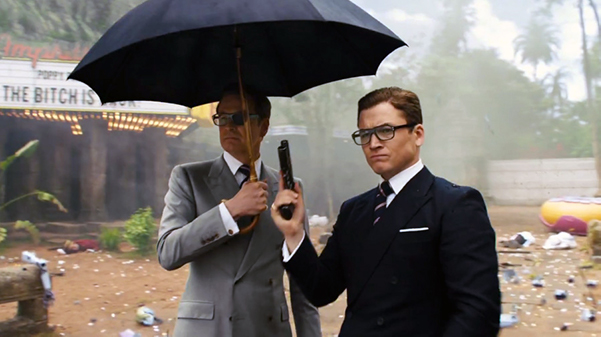 Whenever you storm a super villain’s layer, always take an umbrella. Otherwise you could catch a cold from getting wet which is way worse than getting shot. True story.

But that’s where we lead onto the second outing which you may have noticed, I’ve not remarked on much yet. If you’re wondering why, then read on. Eggsy (still Taron Egerton), now a full on Kingsman, now battles against a new tyrant in the guise of Poppy Adams (played in a quite lovingly horrible way by Julianne Moore) who has poisoned the world with drugs and will only cure everyone if the President of the USA ends his war on drugs in general.

Now you would think that would be a lot to get on with, but the Kingsmen got destroyed and they had to flee to America to hang out with the Statesmen, who basically are so underused properly and with all the stereotypes you expect for Americans that they do become tiresome quickly. The Statesmen are the American equivalent to the Kingsman basically. They also happen to have Colin Firth back from the dead with a really stupid plot device, which allows anyone to come back to life if they spray some gel on them. While it was grand to see the band back together, the gel basically became the “get out of Jail free” for anything bad which would befall our heroes. Well mostly.

There were still some great jokes and silly set-ups for the film, which culminated in a fantastic fight at Poppy’s hideout in Cambodia, which was called “Poppy Land”, a 50s Americana set-up in temple ruins because, why not? These elements from the first film still works well even now. The CGI however was even more obvious as they tried to outdo the first film and some parts of the film certainly outstayed its welcome.

Elton John swearing the first few times were funny but it was too much afterwards. Poppy got a bit of back story but not really too much, just enough to fill out the required bad guy stuff before the main event at the end. Other characters were completely wasted in terms of use, such as Channing Tatum as Tequila, one of the Statesmen. He was made out to play a large role in the trailer, only for him to be laid out sick for the majority of time.

In a strange sort of way, this was really set-up to fail. The magic of the first film would be close to impossible to pull off again and perhaps it was always going to be the sad fact that the sequel would not be as good as the first. The premise was flimsy but let’s be fair, who would care? It was the shoe-horn in of the Statesmen, of which didn’t really bring anything to the table and were badly used which sadly lowered the bar. I liked the conflicts with Eggsy doing James Bond style things but also not wanting to disrespect his girlfriend, it was a nice change. But they didn’t go anywhere near as far as they could with these and it is an opportunity missed.

Given it’s been a year since release, would I recommend anyone watching Kingsmen: The Golden Circle? If you loved the first, of course you should watch this. I personally still had a good few laughs out of it and still had a smile on my face. For anyone else, stick with Kingsman: The Secret Service. It had a lot better story, great villains and had a lot more fun to it. This was trying a bit too hard at times and they could have done more with less.

Perhaps the third film, currently being written will fare much better and we will see a return to form.