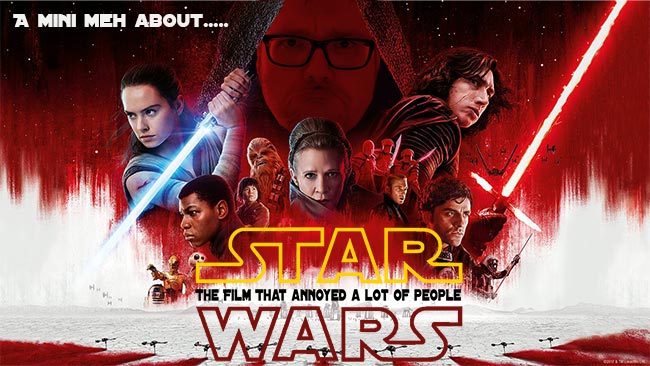 A million fanboys cried out in terror and were suddenly …. well, not silenced, let’s put it that way.

Given the recent yearly “May the Fourth be with you” jokes etc against one of the world’s most legendary movie series now owned by the evil Takazuki Corp. (formerly known as Disney), and the recent release of the Last Jedi on shiny disc, it’s about time we take a look at a film which basically fractured the fanboys of Star Wars and unleashed a torrent of meh upon YouTube and Reddit.

With a box office performance of over $1.3 billion, 4 Oscar bait nominations with even more awards perhaps being thrown its way, why has the Last Jedi actually annoyed so many people as well as delighted so many? The question then follows; Was I along with all others all wrong about it after all?

Let’s be clear, during the Last Jedi Aftermath video recorded directly after watching it the first time, I put down all my chips on being so happy that in essence, instead of being a copy and paste job which was a lot of what Episode 7: The Force Awakens turned out to be, they tried something new. The Last Jedi was f**king fantastic. But now the dust has mostly settled, the hype died down and it’s best to see now whether or not the praise was deserved.

The story overall is about the Resistance once again fleeing from the New Order (Empire, seriously they may as well just be still called the Empire) as the republic is again knackered. A costly bombing run to destroy a big ship leaves General Leia (whose last performance by Carrie Fisher is quite something) no choice but to try and teach Po (played by Oscar Issac) to learn that not everything can be solved by blowing things up. Well, except for when you need to blow things up of course. What follows is a slow chase between the forces as it’s clear the First Order can track the Resistance through lightspeed.

This is why you don’t smoke at petrol stations.

Not sure how this is impossible to do till now, but just go with it. There’s some battles, a plot to save the day more than once and one of the biggest WTF moments which involved Leia using the Force. I understand how it could have happened given time had passed and perhaps we would have expected her to be able to do things like that now, but at the time and even now, it still is sort of jarring that event just happened and perhaps that will be one of the moments which will always take me out of the film.

Meanwhile Rey (Daisy Ridley) found Luke Skywalker (Incredibly well played by Mark Hamill I have to add) and at first is thrown off by the fact Luke has turned into everyone’s miserable old grandad. He wants nothing to do with the Jedi or indeed to help Rey focus her powers and be all that she can be. Meanwhile that also has some interjection of the Force with Kylo Ren (Adam Driver) who basically is in a bit of a bad spot after doing his dear old Dad in. Some treachery is afoot for sure, but what?

To the film itself, there’s a whole host of characters and plots unfolding but not many different locations actually where the story takes place. It’s more focused on the key issues of the Resistance making a last stand against a mighty foe, and the questioning of the whole Jedi Order itself. Truth be told there’s also some question about the whole balance of good and evil depending on your point of view. The way it may have been told would be a bit hokey for sure. It’s some not insignificant issues to get through despite this only being the middle film of the new Trilogy.

We also see Supreme Leader Snoke (CGI’ed up very well as usual by Andy Serkis) dressed as Hugh Hefner, Laura Dern be an unlikely Admiral hero of the Resistance and to be honest, a pretty badass showdown right at the end of the film. It’s a huge amount to unpack over the course of the 2 and a half hour runtime. 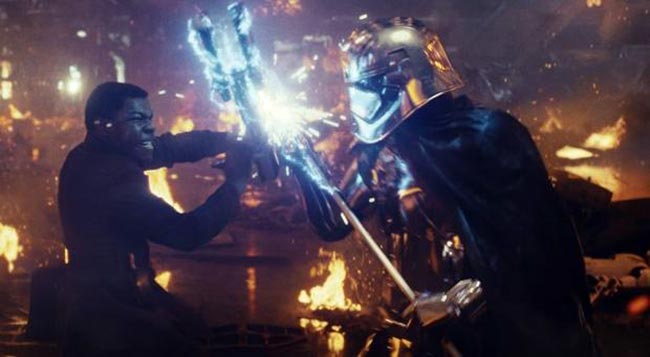 We did get to see Gwendoline Christie’s eye here at least!

One overall theme is that our heroes don’t always get it right. They are fallible but it doesn’t mean they aren’t any less our heroes. They do what they believe is right, even when they don’t know all that’s going on. There’s some quite bold choices to screw with what we would have taken for granted once upon a time, especially when it came to showing us what Supreme Leader Snoke was up to and of course what fate awaited him.

But it’s actually easier to see the flaws now than it was on launch and in some cases, the raging fanboys are right. There was a waste of Snoke, the casino scenes involving John Boyega’s Finn and Kelly Marie Tran’s Rose were a bit meh, and yes, that damned Leia force scene does still bother me. Domhnall Gleeson’s General Hux was annoying at times frankly too but I suspect that was meant to be the case. And to be clear, yes, when her chracter did something people didn’t agree with on the planet where the Rebels were making their last stand against the First Order, you can see Rose’s reasoning for doing said action was a bit stupid to say the least.

Finally; The Porgs are just pointless marketing crap to sell toys. There, I said it.

However, I do see a hell of a lot more good than bad overall with the Last Jedi. It was a grand send off of what we thought about the old Star Wars and introduced potential new avenues for adventures which we really needed.  There was significant loss here to deal with and it didn’t shy away from it. It couldn’t. Special effects, music all were superb yet again and fight scenes were amazing as always. It’s a film I will enjoy again and again.

I still have no reservations about recommending the Last Jedi to anyone. It’s a great action Sci-fi adventure with heart, loss and a great set-up for Episode 9. There are some questionable moments for sure, but The Last Jedi will remain strong with the Force, despite the outrage.

This is Carrie Fisher’s last performance as Leia as she passed away after the film’s completion. She will be missed but never forgotten.