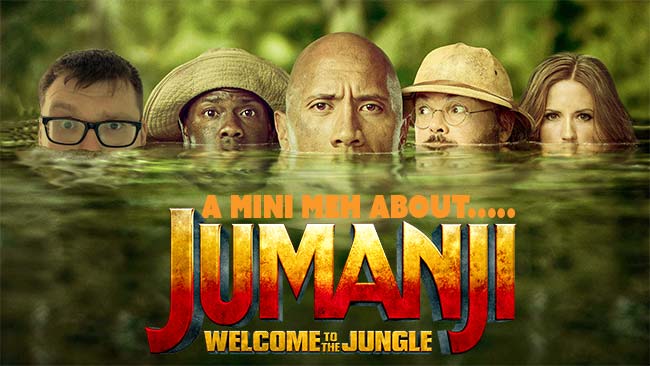 It was at this point we wondered why walk through the water when there was a bridge nearby….

In many ways, it’s a shame I never got round to writing about Jumanji: Welcome to the Jungle during its Christmas cinematic release window last year. But of course, let’s be honest, everyone was more clamouring for Star Wars: The Last Jedi. Well they were till everyone cried out at the fact they tried to doing something different with Star Wars. But that’s a subject for another mini meh (coming soon I might add).

With it’s recent release on shiny disc and streaming services, it felt right to finally revisit last year’s surprise sequel to the 1995 original Jumanji which starred the late Robin Williams as Alan Parish. A kid who got stuck in a board game, only to be released along with all hell 30 years later by another couple of kids.

Jumanji: Welcome to the Jungle had a number of fears to address, mostly notably that it would just forget about the first film and just carry on with the ol’ remake excuse that Hollywood has been on a complete bender for ages with. It had a new cast, it seemed to have a premise only vaguely similar to the original when viewing the first trailer and you could be forgiven for thinking that they were about to f**k it up.

After all, the last thing Sony Pictures tried to reboot for the big time as it were, was Ghostbusters and we all know how that turned out.

Sony’s sole biggest hit of 2017 until Jumanji came to the big screen was Spiderman: Homecoming with partnership with the overlords of Marvel Studios. So of course, no pressure eh? Was this worth a watch at the time, and more so now it’s basically available for you all to slob out in your pants on the sofa to?

What was massively surprising for this film, was that it was a continuation of the first film. We witness the troublesome board game wash up on a beach and get taken to someone’s house, only for them not to bother with it because it’s 1996 and who cares about board games? (OK, we’ll forget the fact that board games are now back in fashion in 2018….) Lo and behold, the game is not happy and basically changes into a video game cartridge to entice the young scamp into it’s clutches. 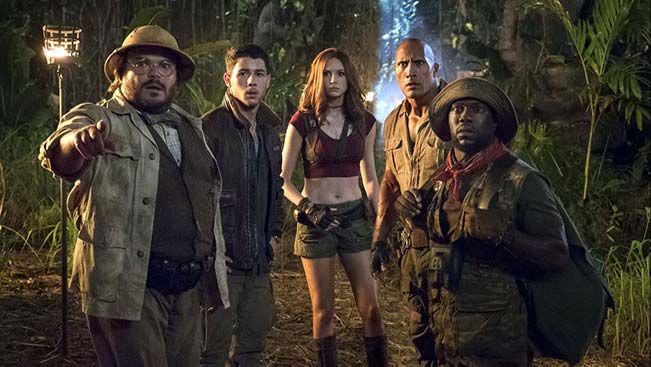 Oh crap, we can’t leave Jumanji till we buy the DLC!

Fast forward and we find ourselves with four schoolkids with various steryotypes for problems and of course they get in trouble and detention. It’s during epic fun with removing staples from old magazines that they encounter the video game form of Jumanji and themselves get pulled into the game.

This is the point we find ourselves with the main stars of the film, Dwayne “The Rock” Johnson, Kevin Hart, Karen Gillian and a superbly played Jack Black as avatars. Their goal, is to save themselves by saving Jumanji with a big green jewel thing. They’re screwed then aren’t they?

This film is certainly played more for laughs than the first film and there’s been more creative liberty taken for sure given the difference that we’ve entered Jumanji rather than the board game spilling back out into the real world. It actually pays off well and there’s some terrific scenes of action, even when it’s too damn obvious about the CGI usage at times. The cast develop a really good chemistry as time goes on, and how they handle their new situation and skills are something to enjoy for sure.

The first time you see the Rock “Smoulder”, you’ll get it. Jack Black borderline steals the film though as Bethany, the sexy self-centered girl who is lost without her phone at first. His mannerisms and how he teaches the other girl of the group (Karen Gillian) to distract men, is just wonderful! It was a genius choice and really added something to the overall fun. Then again, seeing Karen Gillian’s character dance fight to “I love your way” by UB40, was well, you have to just see it. There were some clever ideas on show here, and all in all it was a genuine surprise.

The bad guy is well, bad in almost every way, but how Jumanji’s rules work within a video game context was quite well done, and some of the deaths encountered were just funny as hell (Both with Kevin Hart actually come to mind….), if only as you knew they would be flying back down from the sky moments later. Rhys Darby’s brief appearance as a game non player character was quite jolly as well!

Of course, the story isn’t that unpredictable though and it’s remarkable how little jeopardy I would ever feel there was for everyone involved. Of course the CGI was a bit too damned obvious at times which was a shame, but not too jarring to put me off watching more. Jumanji though was a comedy action film first, and it must be said, it delivered on a quite a few levels.

Would I recommend Jumanji: Welcome to the Jungle to you all, especially now it’s out on shiny disc? Of course I would, it was a great surprise at the box office last year, and having just rewatched now, it’s still worthy of a shout for a good evening in. It paid homage to the first film without you needing to have watched it at all and got a lot of things right in being entertaining. What more could you ask for?