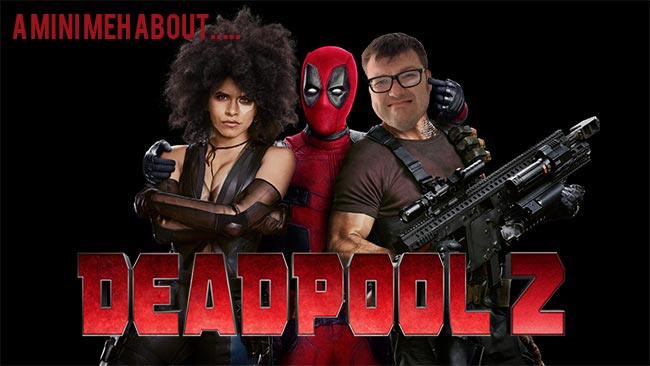 Ok, I admit it, I wish I was in the film. Even if it was just getting a wet willy….. Phrasing!

Full disclosure here, I am a big fan of the pool. So much so of course that I went out of my way to get a t-shirt with Deadpool riding a bear against an explosion to wear during opening night of Deadpool 2 debuting in the UK. The advertising campaign for the sequel had been even better than the first, including a brilliant “sorry” to David Beckham so it’s easy to say I couldn’t wait to watch the film.

Therefore of course you should take everything I say here with a pinch of salt.

But the sad fact is, that the sequel to the wonderfully put together entertaining original film starring Ryan Reynolds as the Merc with a Mouth is….. Not as good as the first film. Sorry campers but it’s true despite everything we wish for. It’s the fall of society as we know it, the world will burn and there are no more Chimichangas. But wait, there’s more!

I enjoyed the film a lot. Huh? How does that work? Is this the obvious fanboy coming out? Perhaps but join me on this journey about Family, Death, Life, Death, More Life and a bit more death….. then you will see what I am talking about, and thus the fog of anger will lift. For about three seconds before you all come back baying for my blood.

For those of you who have not seen the first film, you will for sure need to go watch that first before coming to this as it will not be too friendly to those wandering into the whole thing without any context of the events beforehand. We find Deadpool happily enjoying his life as a hired killer, dealing with various naughty people to the tune of Dolly Parton’s 9-to-5. He’s living with his squeeze Vanessa (the very sexy Morena Baccarin) till something occurs which kind of sets the scene for the rest of the film as a plot point.

Make no mistake, there is some real humanising of Wade Wilson in this film and it’s a strange sort of chracter development to have while maintaining the jokes and feeling of body parts. To top it all off, seems the kid from “Hunt for the WIlderpeople” has done something to p*ss off A solider from the future, Cable (played by Josh Brolin, fresh from being another Marvel Character too) and it’s up to Deadpool to protect the little bugger from said future party pooper with the help of some friends.

Well people who answered adverts and flyers on the streets anyway. 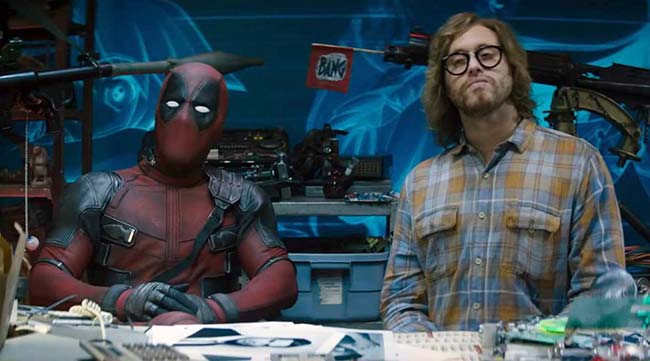 We have a good number of issues worked through the film, including dealing with loss, trying to do what’s right, a cameo from Brad Pitt (Yes, it’s real), more meta jokes and fourth wall breaking (love the DC Universe reference) which should add up to an full entertaining two hour package for all to enjoy. But this is where the issues should come out to be addressed.

Some of the jokes fall flat. Not just a little, a lot. There was some fun made of political correctness, some landed, some were laboured and one in particular relies squarely on knowing what Arby’s is (think meals which give you heart attacks and there you go). It was for some reason at times a bit disjointed, though why I got this feeling, I’m not sure. The MacGuffin of the film is a collar which turns off mutant powers and that in itself becomes an important plot point later on where it’s somewhat laboured again. It’s understandable why, but as Deadpool himself points out, it’s lazy writing.

Oddly this time round, T.J Miller was distracting from the film most of the time he came on screen and every time he was making a joke, it was just so ill fitting and forced that honestly, when he was then off screen it came as a relief. Such a shame as I enjoyed his plucky barman of the mercs in Deadpool to begin with. There was also a couple of characters which were there for not a lot of reasons and it was a shame. Julian Dennison basically just plays the same role as he did in “Hunt for the Wilderpeople” so nothing was new there and another opportunity was missed. 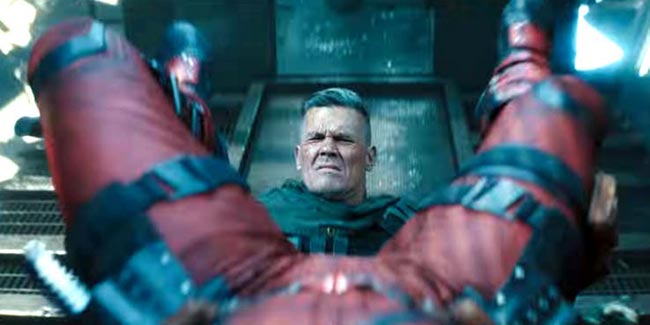 Yes, this is going where you think it’s going.

There are scenes where things happen and you wonder if you had a stroke as things to proceed at a brisk pace and at times, it just doesn’t gel well together from one moment to the next. It’s almost like there were too many ideas and not enough room to flush things out. Deadpool worked more when there was basically only one thing to worry about and all things focused around that goal. Here, there’s several things to work with and only one or two parts ever get the time needed to make fun of, or even just explore a different aspect of the world of Deadpool.

However, make no mistake, this film is a great ride with great action, some awful CGI at times, some excellent jokes, great performances from the main cast on the whole again and some wonderful scenes right at the end of the film during the credits which is just had me laughing hard. It also made me laugh when the X-Force that had been built up so much in the trailers…. well, you’ll see.

So Deadpool 2 is easily worth a watch for those who are a fan of the first film, without breaking a sweat, even if it’s not as good as the first. It had a lot to live up to really and perhaps this was always going to be the case.

It still gives more than enough to make you happy and honestly I still hope there is a third one. It the subversion of the superhero genre we still need, especially given how many more comic book films we are due over the next few years and I can’t think of anyone better than Ryan Reynolds to bring us more Deadpool.

For those who on the fence, watch Deadpool first. Then go watch this anyway.