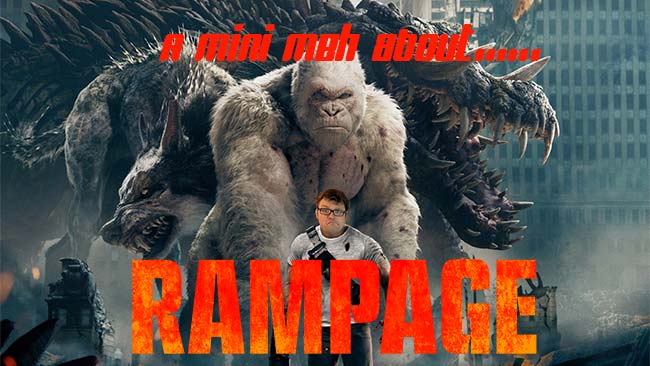 Let’s be clear right from the start of this mini meh; Rampage is 100% on of those films where you really need to leave your brain outside and just go with it. A big budget B-Movie in every possible sense, from the caring muscle mass with a heart of gold who happened to be special forces to the doctor who wants to put it all right.

Even down to the stupid evil sidekick who gets all the comeuppance you see coming a mile away at some point, because he’s the bad guy (or a bad actor) who looks like a certain Dennis Quaid (it’s his son, duh). It makes no apologies for it either, it plays all exactly as you expect, even with back stories which sometimes make you laugh more than they should.

I was on board with Rampage anyway.

Starring Man-Crush #1 Dwayne “The Rock” Johnson (sorry Jason “Nipples harder than Diamonds” Statham, you knew it would happen….. you’re still my #2 man crush) Rampage brings to bear a story about Genetic Editing (yes, editing) which everyone got scared could create Star Trek 2 in real life so they banned it despite potential cures for all the ills.

So what does the “Evil Takazuki Corporation*” ran by Malin Åkerman central to the plot do? Space station to avoid breaking the law. Of course that means poop floats into the space fan and after “genetic editing” a killer rat who gets loose, an extra who clearly wanted too much money is killed. But what’s this? She had secured all the lovely samples of evil research before the space station explodes and not only does the research survive, the samples all fall to Earth.

Which of course means nothing more is going to happen and we can all breath easy? Oh you silly fools who left your brains at the door at the beginning of the mini meh, of course not. One of those samples crashes down next to one of Dwayne’s ape friends in a local zoo, and of course he starts getting better and angerier. He doesn’t turn green but he does smash things. Cue the government intervention, more monsters created and evil company lady sets them off with sonar thingy, a cute doctor lady who wants to bring the evil Takazuk Corporation Mcguffin down etc. etc….. you get the idea. 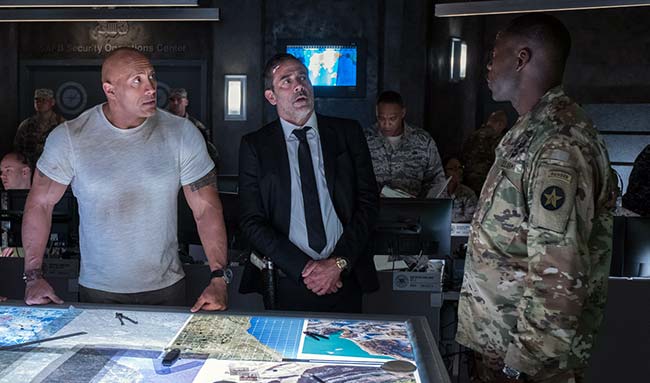 Is it me, or did he just openly fart and get one of his lieutenants to waft the smell over our way?

So what could be possibly said after pretty much spelling out what this film is? I’m glad you didn’t ask as you read this!

One thing that genuinely surprised me with the film was Jeffrey Dean Morgan. He was cast as a secret government dude who is a cowboy wannabe for some reason? But at least he wasn’t again typecast as the bad guy you love to hate. It may have started that way of course but over the course of the film, you won’t help yourself but smile every time he’s there. A welcome change of casting as was Malin Åkerman as the head of the “Evil Takazuki Corporation*“. Not a terrible bad guy, cheesy enough performance which suited this film greatly.

The CGI of the monsters was not too bad and the monster fights when they occured in downtown Chicago were actually damn good fun to watch on the big screen. The lame jokes at times didn’t feel lame, the story itself though incredibly simplistic, was something which didn’t feel off, despite several plot holes being obvious (seriously leave your brain at the door, if you think, it will hurt too much).

In essence campers, it really is a B-Movie in every way, and you know what? No issues in recommending this as bit of summer fun at the cinema. Dwayne just does his man thing which just works, it features pretty much what you would expect and honestly, what more could you possibly want?

Rampage did rampage on my joy receptors and I can only say, catch it if you’re not watching Avengers: Infinity Wars next week. Entertaining silliness and it made no apologies for itself for being so either!