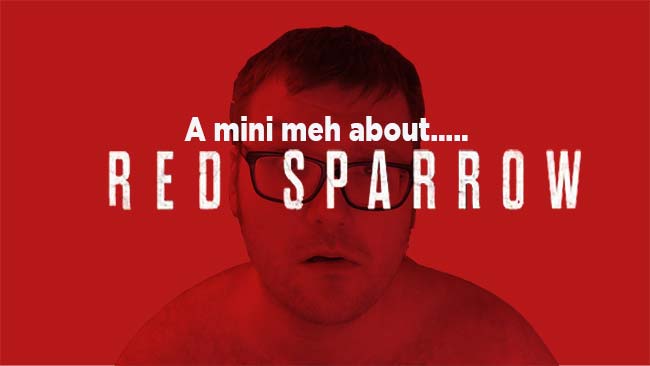 Your eyes are now burned with this image. You can’t unsee it. Counselling is available elsewhere…..

It’s actually been a long time since I waddled down to one of the London multiplexes to watch a preview of the film you’re about to read about. It was actually a day before general release come to think of it. It was a lovely evening out in town, a lot people wandering the brightly lit shopping centre. They were chatting, laughing, eating, and going about their business and all was well.

But why would I be writing about everyday life here? Well, this is one of those times that I actually struggled with what to write about when it comes to a mini meh. It gets worse to say that this was one of the few films where I’ve been openly bored by what happened on screen where I was supposed to be seduced and shocked.

In fact there were times that my mind wandered to think of what to eat for dinner, and if this would be a most excellent joke to play on the film with the news at the time where Conservative Party MPs were calling out the Labour Leader Jeremy Corbyn being called a Czech spy / double agent or something. It was debunked of course but that didn’t stop me wanting to add him to the film title image; 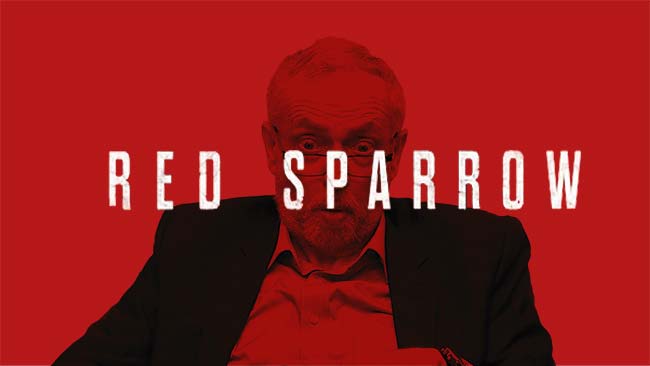 Even sexier, you must agree…..

In the face of so much evidence that Russia wants to destabilise the world mainly due to god knows what reasoning, and given the sex scandals Trump / Drumpf has been embroiled in, it also occurred to me that he would also fit into the Red Sparrow Poster, though of course, it’s much more disturbing to say the least! 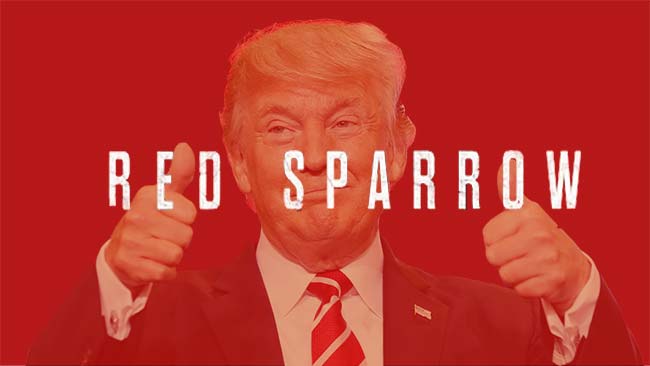 They already have his sexual performance on a pee pee tape….. allegedly.

All this time though, I’ve avoided even going into what Red Sparrow is. It’s been really difficult actually to remark any a lot of it without sounding like just another internet troll. Red Sparrow is a spy “thriller” starring Jennifer Lawrence as an innocent Russian girl Dominika Egorova who lives at home, helping her sick mother.

But what’s this? She is being pulled by her dodgy as f*ck uncle (Matthias Schoenaerts) into the Russian Secret Sex Service. How? Well, why not get raped by a politician who they then kill in front of her, ensuring that she either joins the Secret Sex Spy Service or die because she was a witness to the politician’s death. Seems fair doesn’t it?

The agency in question may as well be called “Russian Secret Sex Spy Service” as the most they seem to learn is lockpicking and f*cking to get what you want. She avoids getting raped in the showers, only to show up her would be assaulter in class by stripping and daring him to take her there and then in front of everyone. It’s supposed to be a powerful role reversal scene but ultimately was powerful as a wet sock.

Then after graduating from the class of Spy Sex, she’s off to spy on an American in Bulgaria who apparently is so good, everyone knows who he is already so like James Bond, he doesn’t even have to pretend to be anyone else. Played by Joel Edgerton, this cocky yankee fellow clocks onto our hero/villain at the swimming baths (because whose head wouldn’t turn when Jennifer Lawrence would arrive in such a damn sexy swimming costume, come on you know it to be true!) and starts chatting her up.

More so, it’s clear the US Intelligence service knows she’s a spy too. Kind of pointless really all this spy crap if most of the spies already know each other right? Well slowly but surely Jennifer Lawrence’s chracter plays her own game and ends up doing some naughty with the American dude. 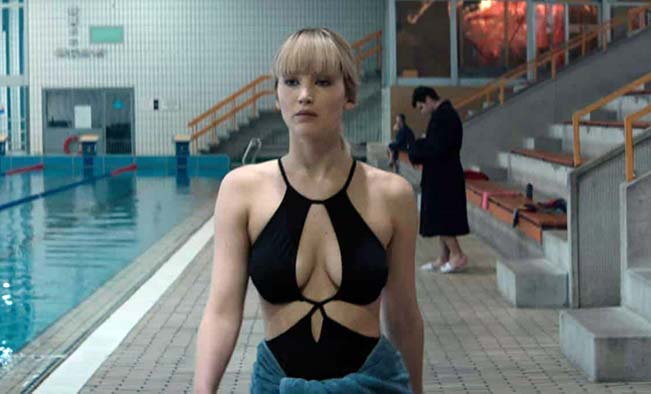 BOOBS! Because there’s literally no other reason to watch this.

Goes to London, takes 3 1/2 inch floppy disks from a drunk Mary-Louise Parker with files on them because f*ck cheap USB sticks in 2018 and then some other stuff happens.

The acting was mostly flat, whether or not that was on purpose, I’m still not sure with the only sign of emotional change coming from the aforementioned Mary-Louise Parker in a complete tonal change which came as a welcome respite from everyone else. The torture scenes involving a device which was used to peel skin off of, I ended up laughing through as it was so ridiculous!

Honestly at the end of all this, I can only say this. Red Sparrow was at best an average attempt to do a serious spy story with the sex stuff thrown in so then people would be more inclined to watch it. But it’s most cardinal sin was that it bored me.

With so much potential to bring life to it all, in the end, I really didn’t care what happened to everyone given the lack of any choice whatsoever by Jennifer Lawrence’s chracter in any of what happened. The surprise role of Jeremy Irons as the General who doesn’t trust anyone and is hardcore Russia in every way did yield some twists which did make me sit up in my chair, but that was nowhere near enough to rescue any hope of the film ending on a praiseworthy note.

Red Sparrow cannot be recommended in any shape or form to watch at the cinema so save your cash for Avengers: Infinity War where they have a much better Russian spy-type lady in the form of Black Widow played by Scarlett Johansson. Much better fleshed out chracter than anything in this flick for sure.