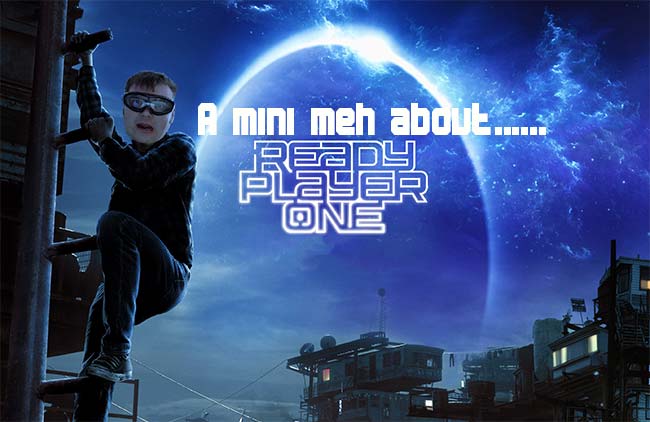 The future is blue, not orange….. And possibly has the Facehugger eggs from Alien.

There were moments during Ready Player One, that I felt tension, suspense. Some laughing, and certainly some annoyance. Just it was against an old man one row back from me who insisted on snoring loudly at various points of the screening. It was a real damn annoyance, as now the Review Embargo is lifted as per the conditions of the screening, it’s time to reveal more about Ready Player One, and whether or not it’s game over yet again for hopes of another video games based nostalgia trip into Ernest Cline’s world of pop culture references in a virtual world.

Steven Spielberg has worked with the author to bring Ready Player One to the big screen, which in no small part is a hell of a challenge. If you’e read the book, or listened to Will Wheaton’s narration of said book, then you know there are times where it goes into massive amounts of detail about some of the computer games, systems, films and other 80s references. Try doing that in the cinema, and people will die of boredom. So the creative team pretty much simplified and redone a huge amount of the story for the cinematic release. It had to be done, and it worked quite well really as a result. So even those who read the book, will not see everything that’s coming.

In this version of Ready Player One, we still have our “hero / nerd” Wade Watts, played by Tye Sheridan (though like with a lot of the actors in this, I really had to look them up as who they were). He lives in an overpopulated caravan park called the Stacks, where life is pretty shit. This gave rise to the fact that everyone instead lived their lives more in a virtual world called “The Oasis”. A place where you can be whatever you want, as long as you can pay for it. Turns out though, the bloke who created the Oasis, James Holiday (yes I know it’s spelt differently) is dead and in essence created a challenge of which the prize would be complete control of the Oasis and a ton of cash.

So everyone’s after it, including naughty people like Nolan Sorrento (Ben Mendelsohn who basically just looks like the bad guy when you see him for just two seconds). He wants to turn it into an advertisers paradise whereas currently that’s banned under the Oasis rules left by Holiday when he went on permanent holiday….. get the joke…. I’ll move on. 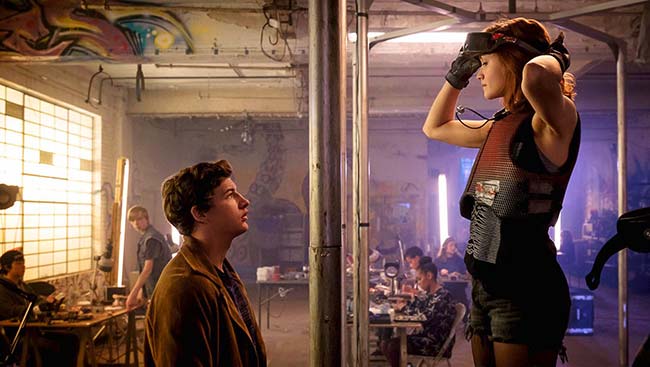 In essence, the plot is a race to the finish line to see who controls the Oasis and potentially impact the world in terms of a service everyone uses all the time. We have the plucky young people who are socially awkward but hearts in the right place against the “Evil” corporation that probably at one point was called OCP and made Robocop. We have a cast of largely unknown actors and actresses, save for Mark Rylance and Simon Pegg who for the most part do deliver solid enough performances.

The music is excellent and given the fact that half of the movie takes place in the Oasis VR world and then the other in the real crappy world of 2049, the Special Effects are actually pretty well done too. As with any kid friendly film there are cringe moments, including the ending, but it’s kind of par the course where Spielberg is involved. The level of humour was great and indeed there were laugh out loud moments, espeically when it comes to the feedback on the suits with shall we say, things that happen to certain people in the Oasis which in turn feeds back to them in the real world. These suits were made for PornHub, that’s all you can say….. Boing. There were some obviously simple but clever moments which were well done and just the epic ton of references and geek moments was just a joy to behold on the big screen.

Ok, show of hands; Who doesn’t want to see an epic race with the Deloren again from Back to the Future while trying to avoid King Kong for example? Seriously, it’s nerdgasm material.

So all is well with Ready Player One, right? Well, no.

Aside from the aforementioned cheesy moments and odd things which you could call out with technology we have now if you’re going to nitpick of course. But the biggest meh comes from thoughts I made on the Ready Player One Aftermath video posted on Saturday of which there was a point made that “I can see why it will bomb at the Box Office”. At first it is a damning verdict of the film.

But really this was my thought process which perhaps I should have explained better in the video; It’s actually more akin to how Blade Runner 2049 fared at the global Box Office. You see, basically Blade Runner 2049 had really glowing reviews for the most part, including of course from myself who just hoped they wouldn’t have messed up the sequel and was blown away.

But that failed at the box office last year for one simple reason; It was not everyone’s cup of tea. It required patience, a huge amount of attention through scenes so slow-moving you would be forgiven for having to go for a piss halfway through, only to then come back and see you missed nothing on screen. Well, that and Jared Leto was playing a rather pointless chracter.

For the most part, the fans loved it and sang its praises. However it will be many many years before it makes it’s money back. Given the choice between this and Coco, the Disney Juggernaut animated “Oscar Bait” film about a Latino boy wandering around the Land of the Dead to become a musician, which kids film would you have picked?

For me, I already rejoined the Ready Player One gaming session and would happily spend time rewatching this, even if just for all the references I would have missed the first time. It got a lot of the fun, the nostalgia and classic children’s narrative right to be certainly a great film to spend time with. However, the old guy snoring through the screening I was in clearly disagreed. That is its biggest hurdle.

I hope I’m wrong when the film is released in the UK generally for Easter, I really do. It would be fantastic to see something like this succeed and in turn, we see more interesting stories. As it stands, this is the closest we get to a really good video game movie and that is a real credit in its favour.