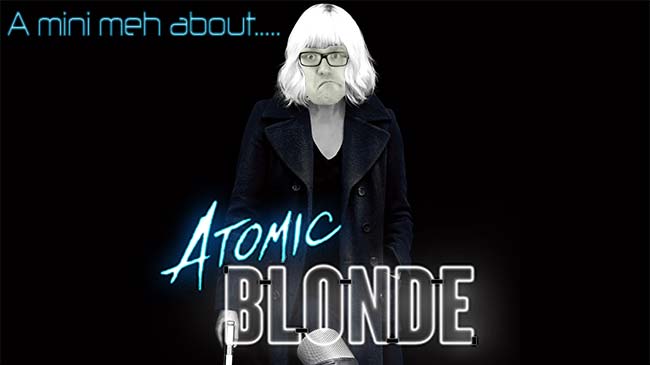 You will never get this image out of your head….

Thankfully, for this latest mini meh about another cinematic event, we leave behind the 1940s now and head to another period of history, the end of the 1980s and Germany. Atomic Blonde is a comic book adaptation of “The Coldest City”, which I have to confess, I’ve never heard of. Not a real shock there, pretty much everything I know about comic stuff is from the big screen these days and the odd video game here and there.

So let’s set the scene; The film takes place towards the end of the Cold War and the fall of the Berlin Wall. However we begin matters with a lovely chase scene and a brutal killing with a car between spies, and the bad Russian dude who ran the British bloke over and shot him, then takes the guy’s watch. Apparently that watch contains a list of spies….

Cross over then to Charlize Theron as Lorraine Broughton (aka the Blonde Badass). She is knackered at that moment. Seriously, she lies in a bath of icy water, and covered all over with various injuries. Make no mistake, she’s been through a war at this point, and she’s hurting too in other ways as she looks at someone’s photograph she has in a drawer. The photo is of the guy offed in Berlin earlier. But quickly and with a bumping 80s soundtrack, she’s off to MI6 to spend time in the company of a couple of agency types. It seems she has some explaining to do as to what went down in Berlin. This was so important that even John Goodman as Emmett Kurzfeld turns up as a CIA agent working with MI6.

That’s pretty much how it all then plays out over a series of flashbacks to previous events, where we get introduced to more and more people who were involved in the whole affair. For example, we say hello to James McAvoy as David Percival. At first, looks prim and proper when presented to Lorraine, we soon see however that he’s “gone native.” In that he’s out of control, drinks too much and does various amounts of naughty things on the side while maintaining cover as the primary Berlin spy contact. Around the place Lorraine goes, investigating various leads, bumping into various nasty people, and even meeting a lovely french spy woman, who she has a sex scene with. NICE!

They’ve been fighting now for about 12 hours. Still no sign on stopping….

It gets more intense later as things are not what they seem (as with all spy stuff), and you are never fully sure who can be trusted. A few twists and turns, along with the attempt at getting the guy who compiled the list of spies across the wall into West Berlin and it all soon adds up to some excellent action and some surprises.

This is a brutal film at times, with a ridiculous amount of violence and swearing for good measure. It was great mindless fun to watch and at the end, there’s no way you won’t be leaving without a smile on your face! Also there were some scenes which really should stand out as a mention. The fighting scene for example, that Charlize Theron carries out against two guys on stairs and random rooms while protecting someone was exhausting at times. There was a point where I was wondering when Peter Griffin and the Giant Chicken from Family Guy also were going to crash through while fighting. Why? It just goes on and on, and I was amazed at how long it went on for, just punishingly brutal and at times comical. But not in a bad way.

James McAvoy is actually wonderful as David throughout, even when he must be cruel or do things which leave you wondering where his loyalties lie, as in context, it all makes sense. The humour is great, the attitudes of the characters are wonderful, never too much to annoy you. The backdrop of the 80s also leads to an interesting aesthetic throughout when Charlize Theron is in her hotel. The bright neon is just ridiculous, as why would any hotel room be classy with this kind of colour scheme and lighting? But you know what, you just go with it. The soundtrack is great and actually I was happy with how it ended too.

I would be happy to recommend this to people who can catch it in the cinema, if not on your favourite catch-up service of choice when it comes out there too. I actually would also be very happy if there was to be another one, as this was just very enjoyable action with a kick-ass female character who also had to go through hell to in essence outwit everyone. Give me more of this and I wouldn’t be moaning.