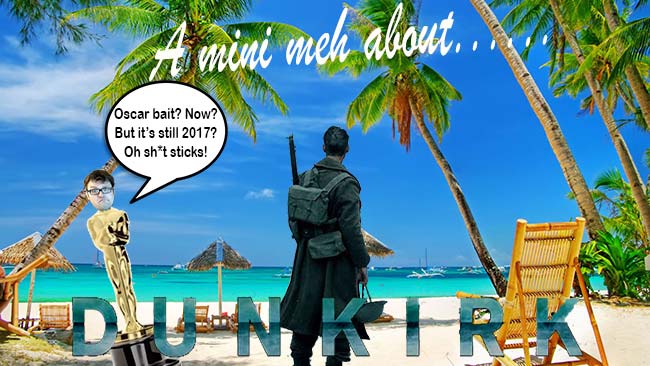 You too can enjoy a luxury stay on this beach before the Germans come along….

It seems that we have our first real contestant for Oscar Bait 2018, and we’re only just over the hump month of 2017.

In true epic Hollywood fashion, we have the second WW2 war film to appear for a mini meh in recent days. Given recent events, it does seem to be more relevant, which is shocking to say. Based on the true story of one of the biggest events of World War 2, Dunkirk shows us the mass evacuation of British, French and other troops by civilian boats.

Hitler had everyone surrounded but for some reason couldn’t be arsed to press the advantage more. So the only thing the allied army could do was try and escape back to England.

That really is the entire crux of what we witness during the one hour forty-five-minute runtime as we experience events from three viewpoints over three different points of time. We have a couple of the troops trying to get away, we have the civilians on a small boat heading to Dunkirk to pick up soldiers and finally we have pilots trying to get over and destroy German bombers.

Now, technically, this was a very well put together film, with editing well done, scenes and sound all relevant and not wasted. However, I’m afraid this is where it starts going down the toilet for me, as I must describe what occurred during the viewing for me here. I was bored.

Honest to whatever deity you believe in, I was just waiting for it to end and had checked out about halfway through. Though it did get a laugh out of me when it shouldn’t have and I can’t even remember the reason why. I know, what I am saying is going entirely against the huge volume of reviews which have been purely gushing over the cinematic epic, and they would not be without reason.

There are some excellent set pieces which convey only a small part of the understandable horrors that went on during that time. The shellshock factor displayed with Kilian Murphey’s random trooper character, troops hiding under fire from an enemy they can’t see, and Tom Hardy basically not knowing when his fuel runs out as he tries to keep the German fighters at bay. In fact for certain aspects, the effects and cinematography was on top form here and that should be praised if nothing else.

Really, I have to cover my face again? Come on Nolan,
I’m not that ugly!

I ended up not caring.

Which is horrible to say, but there’s been better done in terms of storytelling and experiencing the meh of war along with people doing impossible things. This didn’t engage on almost any level. At no point during the three stories, did I given an opportunity to personally get invested within the characters we were following at different points. When something befell one of the passengers on the civilian boat after Cillian Murphy was rescued, my response was….. Oh.

I checked the time and then drank a bit more of my drink as we cut to Tom Hardy in the Spitfire fighting against the Germans. Some flying happened, some shooting, and then to the beach where the men waited. Some speeches between commanders (one of which was Kenneth Branagh) and hiding from bombs coming down, and back to two people from the beach we followed as they struggled to escape.

To be perfectly honest, if that was the case, then how did I come to enjoy the hardship and story of Easy Company as per Band of Brothers? This was put on by a friend so which I have something to compare Dunkirk with. They granted had longer in a 10 episode series to show that, but it was much better quality as a result and brutal at times. In essence, once I was emotionally invested, I wanted to see them through it all. I got involved with the men who were doing the fighting. They had chracter growth, they bonded together and they suffered losses. In essence they kept it grounded around men on the ground as opposed to being all overbearing and wandering off all over the place to check in on yet more perel

Despite the bloody horror and awful conditions, Band of Brothers also had humour and actually showed more about the second World War than I ever expected. The fact that they had the men in real-life from Easy Company on to also give their stories and thoughts before and after each episode gave it more gravitas than what Christopher Nolan could have done with Dunkirk. At least Dunkirk was under two hours, so that was a positive!

So Dunkirk was a great technical film and that’s it. I cannot recommend this at all from a story perspective or even a human story perspective as there was very little here. I know this will be up for some awards, of course it will be, but the only award it would get from me is maybe a few gold star stickers for effort for the effects work and cinematic presentation itself as it damned deserves little else.