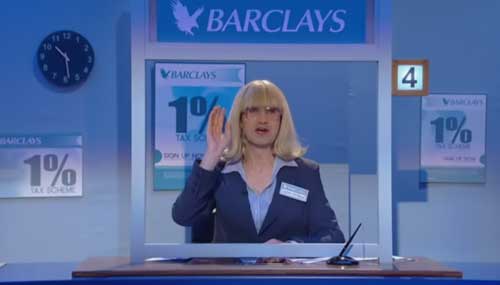 Yep, just once in a while, there is an event in which something is sent from the heavens to us on Earth, and the bitter cynical husks among the human population rejoice with a semi-audible grunt.

It’s not often that they come around, events in which you pretty much can just let the whole thing just pretty much play out without needing to try to create wonderfully contrived jokes about being found naked in bed with a dead badger. This is one of those events.

Now, you see that picture above? Do you remember it well?

Well if you didn’t you pretty much got to see it again, and again and again, as in a twist of delicious fate with which it seems now something that no-one will ever let him forget (please can someone throw a tax self assessment form onto the stage of one of his shows?), it seems that the gentleman above, Mr. Jimmy Carr, seen a year ago mocking the big naughty bank Barclays paying just 1% tax, was found out that he pretty much did the exact same thing via a K2 scheme set-up in Jersey.

It just gets better. This morning as the only offical statement coming via Twitter, which given the apparent public outcry, was the safest way of doing it with a brick being thrown at his head. Among the few sentences written, was this;

An error in judgement when someone asked you “Do you want to pay less tax? It’s totally legal”? Please….I can’t. It’s…too easy. But I may never get another shot….no, fight it Paul, fight it with all your might. You can be the better man here.

But, good lord, even the name of his forthcoming tour, Gagging Order, now seems like it may have been a backdoor request to keep all this out of the media. Oh screw it, I’m going for it;

Ok…ok….I’ll stop, as Jimmy has said sowwee next to a picture of a cute kitten and promised to not do naughty things in future.

You see, when wonderful events like this happen, when the the affluent and shall we say, financially self-sustaining among us, get their faces plastered over the papers, the reaction tends to be the same for the most part.

It has not been the first time, and it won’t be the last, as even now, Take That, the boy-man-horse band find themselves at the center of the current tax evasion tidal wave, with their own little thing which while helping the music industry, somehow managed to incidentals secure themselves some extra money in their pockets. Oops.

Could It Be Magic? No, it’s just some really good accountants. It Only Takes a Minute to get caught fiddling the system, and then Everything Changes. Now HMRC wants your tax, wants your tax, they want your tax for good….no Paul fight it, stop giving into the easy way of writing…

It became even better when the politicians become involved and have their say, like our current overlord, captain of the pirates of the coalition, Mr Dave Cameron.

“People work hard, they pay their taxes, they save up to go to one of his shows. They buy the tickets. He is taking the money from those tickets and he, as far as I can see, is putting all of that into some very dodgy tax avoiding schemes.”

Just as well Dave never got his mortgage paid for by the taxpayers….oh sh*t, he did. Just as well Members of Parliament never got embroiled with anything to do with public finances..except for that tiny little expenses thing which no-one remembers. 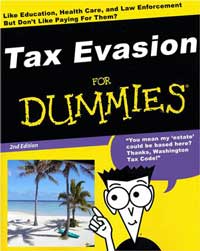 So that’s how they did it.

Actually throughout the years come to think of it, the second anyone gets a chance to gain some cash or manipulate things for their own ends, they jump at the chance like a fat man alone at a free all you can eat buffet. Morality seems to be the last thing to ever come into it (more hypocritical b*llocks actually come to think of it), and perhaps we’re all bummed out that we can’t do the same ourselves.

Given what the average person would be able to save in tax had they chosen to go down the star-studded “investment” schemes, the tax currently being paid out to the wonderful rouges at HMRC, could say pay the rent without breaking a sweat, leaving a large additional sum per month to be spent on drugs to be sniffed off the wonderful porcelain breasts of an Albanian prostitute.

Or do some other things probably, like saving for a house, take a trip of a lifetime, or just grab a wad of cash to light a cigar with in front of a homeless guy, before dropping your trousers and p*ssing all over him. Dirty begger, now he smells too.

So given the public outrage aganist people who basically can do what they like because the majority of it is all legal (and good luck waiting for those loopholes to be closed), perhaps it’s now best to state fully what our intentions will be if anyone from down in the streets below were ever able to “legally pay” £3500 in tax a year instead of over £100,000.

We should just admit, that yes we’d do the same in a heartbeat, and when it comes to anyone else, “F*ck you.”

After all, the examples have been clearly set by our loftier peers, and I don’t know about you, but I for one follow our role models exactly. Mind you, it would be nice to know exactly how to do the same thing, given the apparent ease with others manage to become more “wealth-enabled.”

As I’ve no real idea on how to begin, the best place to start must be an ISA, and then it’s only a matter of time before it’s transferred to the Cayman Islands and “loaned” back to you for nothing. Is that how it works? Is there a man with a pencil thin moustache telling you it’s OK and then gets a monkey to serve you a cocktail? Is money left in toilets where it grows into a tax haven as no-one wants to touch p*ss-stained notes? How does it work? Is there a book we can buy to learn how to become “austerity-protected”? Someone for the love of Mike and Zombie Jesus, tell us now or face more tutting from slightly annoyed people!

Actually to draw this to a close, can any of you wait for the next time Mr. Carr dons that lovely blonde wig and tries to make a swipe at someone else for tax evasion? Sorry, it’s not tax evasion, it’s a very dull way of doing something that someone else doesn’t want you to do.

Remember the difference here, it was legal. It’s all legal.