Now this is going to appear to be something of a bizarre topic to bring up at this time of year, given the fact that those turkeys aren’t going to eat themselves and Grandma needs throwing on the fire, nevertheless, this evening it was something I felt compelled to write about and given the fact after two days in and out of bed exhausted, finally the time has come to put finger to keyboard once more.

Something came up at work (oh yes I’m still employed by a real firm you know, well at the time of writing I was anyway) recently and one event that has been at the back of my mind a fair bit, was the fact that we all had to adhere to a new “Blogging policy” which is a new thing to have to consider really when you’re a happy go lucky chap on the internet writing about how many time you went to the toilet in one day or the questionable smells from your armpits.

There are now for the first time ever, official guidelines I now have to follow, perhaps out of something truly horrible happening like business being lost, or perhaps even people avoiding working for them, for hearing the latest in a long line of spooky stories at the haunted corporate building. Who knows why they materialised, the fact is that they are there. 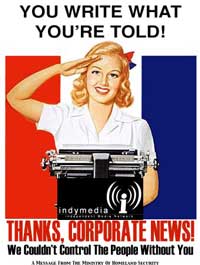 Then I started wondering more about the whole area of “enforced” censorship as a result of who you work for, and not for the first time either, this subject came up a while ago: How to write a Blog without losing your job… from September 2007 in fact, when a female worker got fired from Nintendo for being thick and I learned about the existence of “Blog Change Agents” working for companies writing to people who write about them negatively to try and change their opinions via one means or another. Maybe it’s time to revisit the subject and see if things have changed and perhaps now find way around the minefield that is blogging freely while under the company rules.

Well even at the arse end of 2009, not a lot has changed in many ways. People still get jolly upset legally when you mention them with their PR people having a look over first and it appears someone did just that recently as we were all warned recently by various managers to not knock the company you work for to other people outside your family as not only does this reflect badly on the company, but also yourself as a person. Though….surely that’s obvious.

I mean not the “badly on you” part, let’s be honest, raise your hand if you’ve moaned about work to anyone outside your family. There we are, we’ve all done it and it’s part of conversations that people have on a daily basis.

But the stupidest thing to do is this: writing down your annoyances on the internet for all to see. Then frankly you’re asking for it and you deserve to get your arse handed to you with a lovely P45 tax sheet to hand in at your first day at Burger World.

As much as we all would love to write a 70,000 word novel on the whole subject of why our workplaces are located in the 7th layer of hell including a couple of chapters bad-mouthing everyone who steals our oxygen, wondering who the hell stupid people advance to positions of authority even though they could be outwitted by a dead badger, while earning 17 times what you do, while you struggle living in a bin etc etc, what purpose would it ultimately serve?

Granted it’s a release of anger, pent-up aggression that one seldom can excise in other ways other than a good hard (woooh there, can’t put that in), in the long run you will only serve to damage your employment chances, which given the fact we are still in a depression, is just as bad as teasing a lion by putting your head in it’s mouth while flicking it’s love spuds with a wet towel. So what good actually does get served from writing about what you do?

The odd exception aside from long and boring technical manuals or equally dull autobiographies which springs to mind was the work created by Belle de Jour, aka Dr Brooke Magnanti, the woman who wrote about her “work” in the Secret Diaries of a Call Girl, which led to the series where Billie Piper made sexy noises a lot and got her breasts out for ITV2.

In a strange sort of way, this writing served to highlight what it was like to work in a certain industry, the highs and tragic lows along with strange situations which can occur even when doing the job on a regular basis, in this case, the naughty industry. It’s the only exception that springs to mind at the moment that had become popular and sold very well as a result. But again this was all still cloaked in an air of mystery as to who it was that was writing such material, only the fact of who wrote it came out this year, way after all the material had been out on the public domain for some time, and her finanical future was assured.

Given the fact that there is the worry about writing the wrong thing these days, here is a link to the EFF that was given to me recently with tips on How to Blog Safely (About Work or Anything Else) and a lot of the tips revolve around being anonymous. That’s it. The key to the whole freedom of speech bit is be anonymous.

It seems to protect you from a lot of things and in a twisted fashion you could end up becoming a blogging superhero, working by day as a binman, but at night, armed with a keyboard, you destroy the festering corruption that is coming from the local council’s bin management policies and put an end to 17 different bins being used for the same thing. Provided you are smart about the whole thing, you could change things for the better or, let’s be honest, get what you really wanted; a column in the Guardian.

It seems to work for a number of miscellaneous writers who appear in the newspapers, commenting on the City’s daft financial practices while buying another boat for themselves as a treat or those stupid twentysomethings just writing about their love lives which are almost always utter failures, oh boo hoo…..To me, they’re all tw*ts.

But really a lot of us will not achieve anything from such writing and therefore in most ways it’s just better to shut the hell up. The UK, though behind America in setting up policies based around what you do outside of work, is fast catching up, and it won’t be long before it’s the new standard that you sign a form stating that you will not talk about anything work related unless authorised to do so.

Should we be actually be concerned that more and more, your workplace can dictate what we can and can’t say on a medium that’s meant to be free from restraint? Well the simple truth is you should be more concerned about the X Factor, the cost of wonderbras or the fact that global warming is occurring as a result of your excessive farting instead. It’s actually less likely to attract the wrong kind of attention and won’t be an issue on your ability to keep that cardboard box over your head at a time where career options are limited.

Unless you’re a hard working prostitute, in which case, I salute you and look forward to reading about all it.