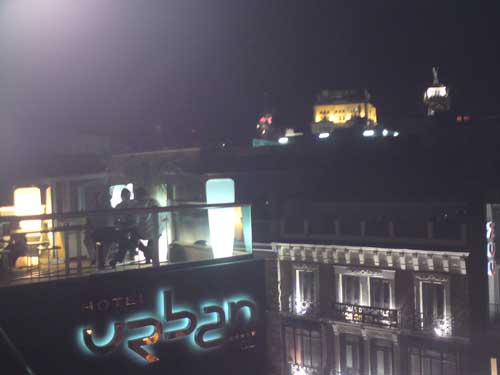 Well after the first day, it seems almost mandatory that I write something at least, given the fact that throughout the day I’ve been asked “You’re working on a bank holiday, why?” just to overlook said fact really.

In fact this morning started out rather slowly, after the night before when I arrived late, and had spent about 20 minutes on the famous (apparently) roof garden of the Hotel Urban, and crying over the fact that a small bottle of beer cost 9 euros.

I could into more detail of the stages of man that is the morning routine of fumbling about in the dark, but I’ll leave it there.

Having made my escape to the exit, I looked for breakfast and thinking I was running late, I went to Starbucks. Yep, go to a different country and end up having the same thing. No wonder I’d stink doing old Michael Palin’s job of wandering around sitting in various plac….err…never mind, and then I tried to get a taxi to work.

Not a difficult thing to do, however I barely speak English, let alone Spanish or any other language other than complete b*****ks, and trying to direct the driver to somewhere where I was pronouncing it like marijuana, he probably thought I was after a good time.

But once the mix-up and the exchange was made (wait, scrap the exchange part) was sorted out, I arrived to a near empty office. Turns out most people only started coming back today, and were still in a holiday mood. Ok then.

Still it was always interesting to see how the Spanish work, and I never get over how care free they are. The building could be burning down, society collapsing but as long as they have a ciggie in one hand, and time for a chat, bugger what happens.

I’m ending today’s blog post (making it sound like I write on here that often, as if anyone will believe that) to catch up on translating stuff and having a wander around town, the sun is still shining and there be much eye-humping of the ladies to accomplish.