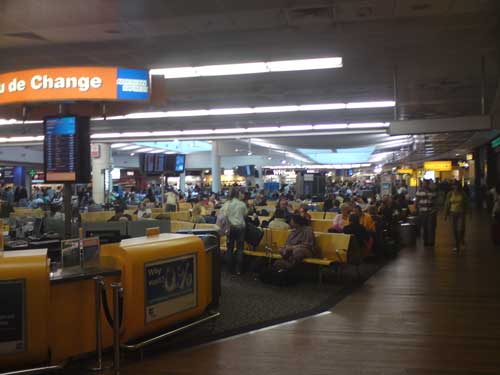 Well seeing as I am currently at Heathrow Terminal 3, along with what seems to be the rest of London right now, maybe the Notting Hill carnival scared everyone or something, I have managed to park myself down with the laptop and for the first time in ages, at least update this magical muse of the world with something of substance.

I had an inclination of doing so while here anyway before the brown-trousers-time that is the flight to Madrid, but the timing came around so quickly it suprised me.

I had reached the airport in good time, wandered through all the fancy check-in thing, pushing buttons, scanning different things, and then after being hand raped by the UK Border control people, you reach the DMZ that is the “Duty Free” area.

I reached the level of utter boredom within 12 minutes, a new record for loitering around an airport. Simply put, unless you are in the market for overly priced booze, ciggies or electric gear which is cheaper to get at Play.com, your mind starts dying very quickly.

Then again, I do wonder if this is on purpose; allow the mind to lapse into a coma to dull everything for the flight out, therefore removing from your subconsciense the knowledge that you fly 30,000 feet in a tin can, and that you’re the only non-terrorist aboard not wanting to play with the combination of fire and footware.

It’s not the first time I’ve remarked on the fear of flying, nor will it be the last, but given the fact there is so so little to do, you can’t even play with sharp things on your wrists with the security here, that you may as well be slumped on the floor like a dead bumblebee.

There are have a great many things happening in the past few weeks, including watching that new film, Incorrect bellwethers with Brad Pitt playing Jimmy Hill, Bruce Forsyth or indeed anyone else whose chin could be used to land planes. Trust me, a post regarding the film is deserved, for slightly different reasons than you might think though. Hmm, should I spoil it now or wait.

Nah, wait. Waiting is the theme right now, and it can wait till later on when hopefully (if Gravity hasn’t decided to book the same flight as me and f**k things up) I shall retire to the roof garden of a fancy pants hotel, drink something I have no idea what it is, and then once again whip out this very device I am typing on right now.

For now, I bid you farewell. Now, I need a drink with accompanying VAT receipt….