Since Thursday of the preceding week, you may be forgiven for thinking that it’s all going a bit wrong for the Lord of Leisure at the moment. The first day at work in a new environment with new people in a completely different field of industry altogether went down like telling an Arab joke involving Bin Laden at a mosque.

Walking around what looks like a set from Bridget Jones with thirty something women around looking at screens wondering if the knickers they bought from Primark would not make them a laughing stock when they have chatted up a man at the local bar, you start wondering if perhaps the films made in London were not as farfetched as they seem.

The first day was one filled with only questions with not that many answers forthcoming and I was given the task of finding out what the carbon footprint of the equipment used is, at the moment. Yep, I know. But let me explain the issue.

The only problem is that it is close to impossible to be 100% sure about the power usage etc, as this depends on many things including how much heat the equipment is spewing out therefore giving more work to the air conditioning which uses more power, then you have other things all plugged in like backup power etc and you then find that it’s a bit of an effing task to do.

The IT worker’s best friend “Make it up” will have to be called upon.

Of course the whole carbon footprint thing has been questioned along with the bigger global warming issue. Aside from the fact that the earth is now cooling according to instrumentation that the fancy scientists play with, most people view it as a new way to tax people. But it appears it’s now being used as a PR stunt and a way to secure funding for new shiny things and perhaps that’s what it is all about at the end of the day.

So the end of the first day occurred with scary Tube trip back home and you of course will now wonder what is going on. 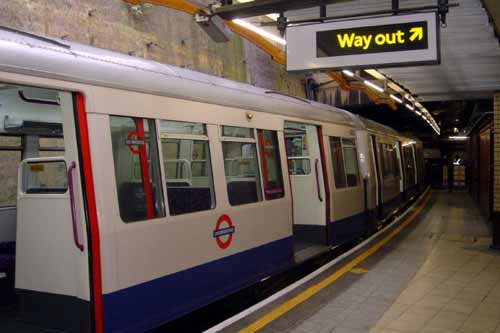 Day 2 wandered around like someone selling the Big Issue or indeed, one of the lucky immigrants asking for spare change all day on the Tube to anyone who happens to be unlucky enough to want to use public transport.

It was different certainly. The trip into work was in fact worse, with even more people than the day before all crowding in to the Docklands Light Railway, which actually begs a question: How the hell can the last day of the week be the busiest? Has no-one heard of the weekend?

I had in fact decided over breakfast, while having a chat with the various voices in my head that a renewed sense of vigour should be given, basically forget the first day, it’s too early to say what’s going on and in fact that was when the work proper started, along side of course the work given the day before. And as it goes it was the right thing to do. After all, there is a place where people watch TV all day and get paid to do so, so it can’t be all bad eh? 🙂

As the day wore on, and the exposure to more things occurred, and I started to have more contact with the natives, a sense of hope creped in that maybe just maybe, this will be alright in the end.

As an extra bonus for finding out more, I’ve been invited to the in-house bar for my introduction to the company in a couple of weeks time for finding out the basics such as holiday booking, and what extras there are.

One trip to Euston station to pick up some tickets later while chatting to Mr Tebbutt back up in Manchester about what had happened so far and home beckoned. Thus ends the latest entry in the digital diary.